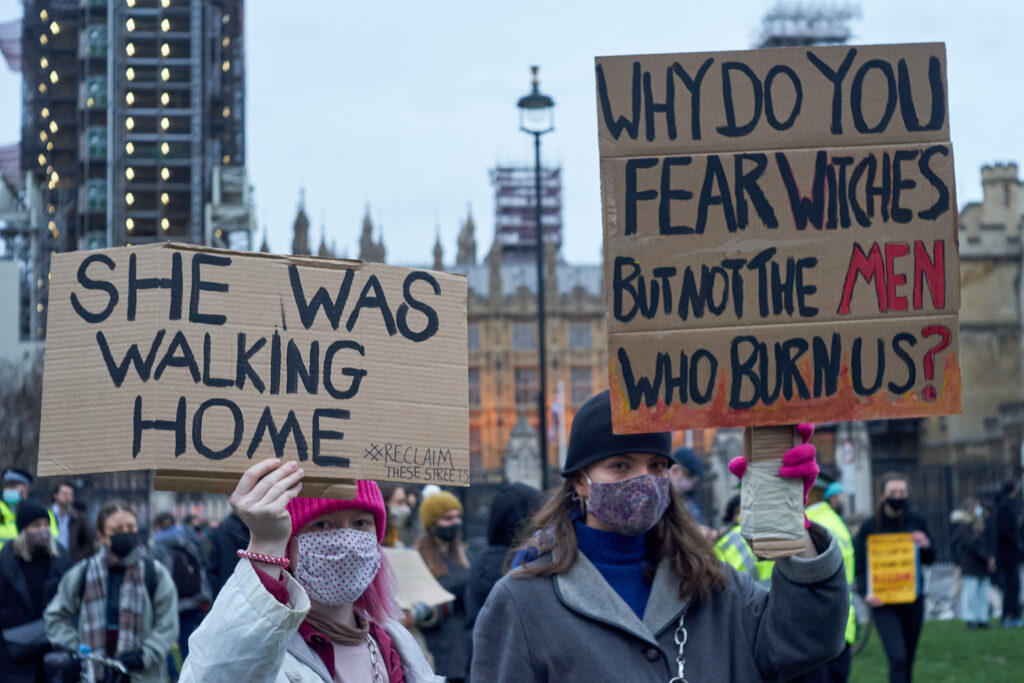 A protest against police brutality during the vigil for Sarah Everard in the UK. [Credit: Vincenzo Lullo via Shutterstock.com]

(LONDON, UK) – Weeks after the killing of marketing executive Sarah Everard roiled the UK, the country’s Shadow Minister for Domestic Violence spoke candidly about issues of women’s safety in a Wednesday panel organized by The Guardian.

Jess Philips, the British Member of Parliament for Birmingham Yardley, was joined by Andrea Simon, director of End Violence Against Women Coalition, and Dr. Stephen Burrell of Durham University. The Guardian organized the panel in the wake of the Everard killing in London, which has led to a vast outpouring of anger and soul searching about abuse and violence faced by women in the UK on a daily basis.

“This moment that we are having now, I hope this is the moment that reality meets the politics,” Philips said.

Alexandra Topping, who has been covering Everard’s story for The Guardian, chaired the panel to highlight that women are facing multiple facets of violent behaviors in their everyday lives.

“While it’s true that you are much more likely to be murdered by a partner or a former partner than you are to be attacked and killed in the streets, the spectrum of violence and harassment and abuse that girls and women are experiencing across their lifetime, including the horrendous issues of sexual harassment and rape of schoolgirls, all contributes to a climate of fear,” Simon said.

The UK’s Office for National Statistics (ONS) has calculated that for the last 12 months, the number of women murder victims in the country was 207. Approximately 57%  of these women were killed by someone they knew, most commonly a partner or ex-partner.

Authorities allege that Wayne Couzens, 48, a London Metropolitan Police officer, abducted and killed Everard, 33, in early March. The police allege that Couzens kidnapped her while she was walking back home from a friend’s house. Couzens has been charged with the kidnap and murder of Everard and will likely face a trial in October.

In light of the alleged circumstances of her murder, the panel highlighted the need to “move from protecting our girls to educating our sons.”

“Men can play a very important role in creating change and setting an example to other men by speaking out about sexism and misogyny whenever we encounter it,” Burrell said.

Phillips mentioned that the gap between what a “good headline” looks like for the government and what it means for “women on the ground” has to be bridged. She also voiced her frustration at the current British government’s steps in tackling violence against women.

“We are racing towards an end that none of us can ever believe we’ll reach because it always seems just slightly out of reach,” she said.