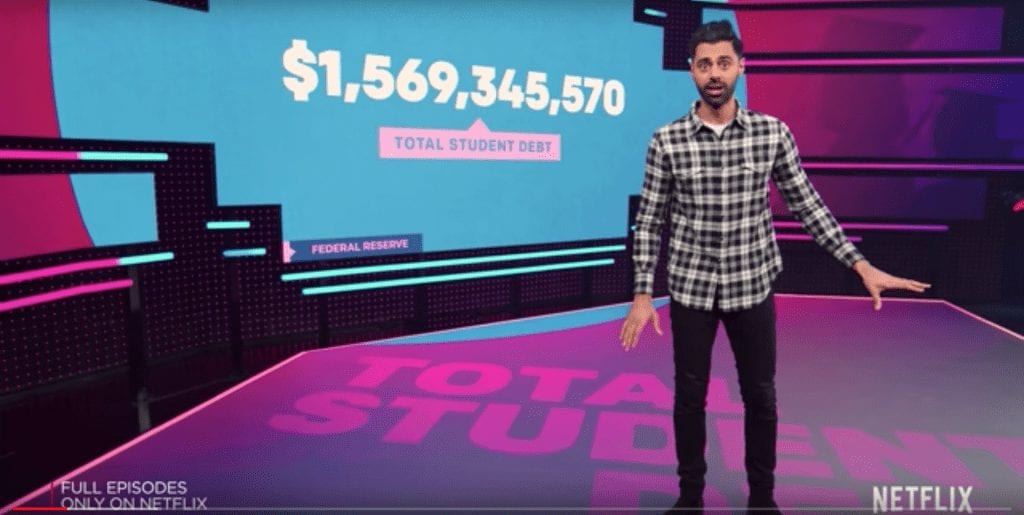 Last week, comedian Hasan Minhaj testified before Congress on the student debt crisis. The Hill reported that at the hearing of the House Financial Services Committee, Minhaj testified to the long-lasting burden of increasing student debt and, between one-liners, produced data on each committee member’s estimated tuition costs to illustrate the rising cost of education in America, and the limitations it creates for a growing number of people.

How did a comic earn an invitation to weigh in on an issue affecting more than 42 million Americans?

Minhaj is an actor and comedian who first entered the spotlight as a correspondent on The Daily Show and is now hosting his own program, “Patriot Act,” on Netflix. On the show, he relies on humor and pop culture, as well as his experiences as a Muslim, Indian-American, to offer comedy and context around complicated issues. A recent episode that analyzed the student loan crisis drew the attention of Committee Chairwoman Maxine Waters (D – Calif.), who issued the invitation.

At first, Minhaj doesn’t appear to act like a journalist, and he’s said in interviews that he’s not. His jokes have teeth, as demonstrated by his controversial speech at the 2017 White House Correspondents Dinner. His face appears on more than just late-night, but also on his comedy special “Homecoming King” and movies like “The Spy Who Dumped Me,” alongside actresses Kate McKinnon and Mila Kunis.

But with “Patriot Act,” Minhaj is in the unique position to create journalism in a new way, and on a scale that is inaccessible to many traditional journalists and outlets. Throughout each story, Minhaj is able to take viewers down a rabbit hole of data, simile, and humor to break down nuanced topics, showing their relevance in the world today and their implications for the future: “Imagine starting a race… and the guy with the starter pistol shoots you in the leg,” Minhaj jokes as he explains the burden of student debt.

Seconds later, he explains that student loan debt has eclipsed both credit card and auto loan debt and that, according to a pre-show poll, there were over six million dollars in student loan debt in the audience alone. Viewers have to ask if what they’re watching — a series of sometimes hyper-specific jabs at racism and capitalism, framing a detailed and compelling story to take you through that week’s topic — qualifies as news.

The show’s features are deeply researched and presented with the backing of a data and graphics team that makes them easy to understand — and they’re tackling topics that are in the public interest: the student debt crisis, the American policing system, the opioid crisis and more. Even topics that seem less serious, like the brand Supreme and corruption in cricket, are presented as studies in economics and politics. And the creators are doubling down on their mission: IndieWire.com reports that at an Emmys’ FYC event in April 2019, Minhaj said, “We’re going to have an internal investigative reporting team at “Patriot Act”. Going forward, we’re gonna start breaking long-lead investigative reports that we’re providing all the footage and sources for. I’m really excited to do that.”

With video streaming and a powerful company like Netflix behind him, Minhaj has the ability to produce and distribute stories in a way that’s changing the avenues and options we have to consume news.

In the first year of the show, Minhaj has already faced some of the more extreme challenges possible for journalists. He and the show came under fire when Saudi Arabia called for Netflix to take down an episode featuring an analysis of the Saudi government in the wake of journalist Jamal Khashoggi’s death. IndieWire notes that at the Emmys’ FYC event, Minhaj mentioned that as a result of the story — being identified as a critic of the Saudi government, which has a tumultuous relationship with journalists — he may not be able to complete his Hajj to Mecca, an aspect of his religion.

In some ways, “Patriot Act” is an evolved version of programs that have already been operating. Tracing through Minhaj’s alma mater “The Daily Show,” to shows from other “Daily Show” alumnus – “Full Frontal with Samantha Bee” and “Last Week Tonight with John Oliver” – to those who launched their news and commentary careers online. Since the early 2000’s, YouTuber Phillip DeFranco has used similar humor and voice to share the news of the day with 6.4 million subscribers and the tagline, “News that matters to me and should matter to you.”

It’s not the deeply-investigated, Emmy-winning designed pieces that Minhaj’s show features, but it accomplishes a similar function: sharing the news in a way that engages a crowd that doesn’t necessarily follow mainstream news giants. According to The Baltimore Sun, one-third of DeFranco’s first 11 million views were from 16- and 17- year-old girls.

While DeFranco’s short-lived channel, “SourceFed” — which featured a roster of hosts and higher production value — definitely fit into a neater box of ‘journalism,’ the DeFranco show falls on the side of aggregation and commentary, often even critiquing the way traditional media reports stories.

Today, DeFranco’s channel now has over 2.7 billion views, “Patriot Act” won a 2019 Peabody Award and Minhaj was named one of Time’s 2019 100 Most Influential People. Viewers may debate whether the two hosts full embody journalism, but it’s clear that each has staked their claim in the changing world of news.