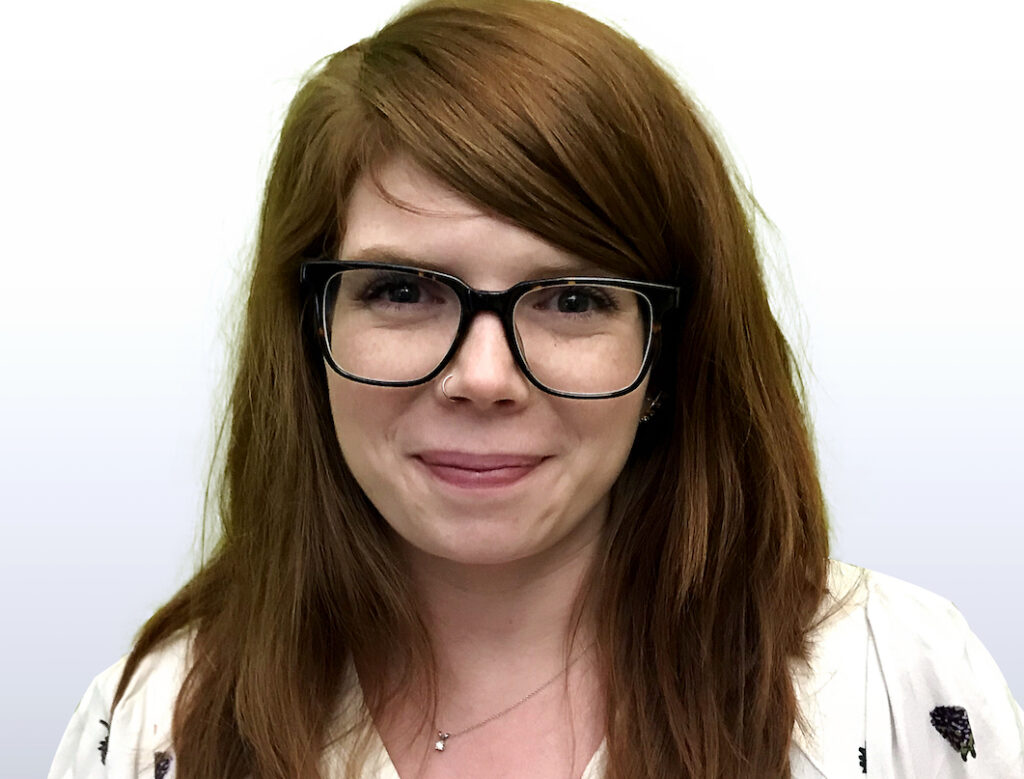 Becca Andrews is a gender and healthcare reporter at Mother Jones. [Photo courtesy of Becca Andrews]

I was in Nashville at my desk working on the book and I got a text from a close friend. She texted me a GIF that said something like, “That feel when your rights are going away” and I thought, “Wait, what the hell just happened?”

I looked it up and immediately logged onto work Slack even though I’m on book leave. I thought, “Ok, I prepared for this.” I pinged my editor and said, “You’ll have a draft in two minutes.”

My editor and I had been talking about the end of Roe for a long time. It’s strange to know it’s coming. But then this leak happens, which has extremely personal ramifications for me, particularly because I moved back to the South and my community. I live in Tennessee. This is going to hit the South the hardest.

Part of me thought that night, “How do we know for sure that this draft (or opinion) is authentic?” Every newsroom has its weaknesses, but it was very clear to me in their reporting that Politico had taken pains to authenticate the draft. The opinion felt authentic to me from my years covering the court and reading Alito’s opinions. But there was that little thing in the back of my mind, “What if…?”

It’s Not a Weakness, It’s an Asset

It bothered me that there were some news organizations and political reporters, particularly male political reporters, who were more caught up on what the leak meant for the security of the court and the court’s standing with citizens in the country than what it actually said and what it means for all of us who are female and have uteruses. That was very frustrating to me.

It’s hard within the context of a newsroom. We are trained, particularly as female journalists, to not ever let that stuff get to us; to not show any iota of weakness or that you could be personally feeling what you’re reporting. That was something that I really struggled with, particularly in the aftermath.

This opinion was earth shattering. It directly impacts my human rights. I can’t jeopardize my role in the newsroom as a leader and I don’t want anyone to think that I’m not capable of handling this right now. That’s a toxic dynamic and we need to be talking about it more in our newsrooms.

Honestly, I think because I recognize my own humanity while I’m in the field reporting, it has made me a stronger writer and a better journalist. It’s helped me create stories that people can connect to. I don’t see it as a weakness, I see it as an asset.

Remembering It’s Not a Final Draft

My editor and I had been talking about how to cover the decision itself and then how to cover the fallout. Had this particular opinion not leaked, there would have been a mad scramble of state houses convening to figure out what to do and how to jump on regulating abortion right away.

Usually when the court has an opinion like this, it’s carefully watched and anticipated. They’ll wait to drop it in the summer, towards the end of their season. I assumed we’d have till the end of June or maybe even longer. Who knows, we’ve got plenty of time. And then a few hours later, it was like, “Not anymore.”

When it first leaked, there were a lot of people who weren’t taking the time to clarify that this was a draft opinion. It’s not in effect. Abortion is still legal in the United States. You can still get care.

That’s really important. This is a problem within reporting on abortion legislation. In particular, where people will write about a bill but you know there are a lot of people in this country who don’t really understand the legal system. And there are a lot of very good reasons for that. Take the time to make sure people know that their rights are still there.

It’s important to clarify each step, where things are and what people can and can’t do. It’s really confusing. The fact that it’s confusing is a feature, not a bug. And it fucks everyone who is vulnerable in our country, and that’s who we want to serve, right? In an ideal world, we are trying to speak truth to power.

The political tide turns. It always does. If Roe is going to be dismantled, it does not mean that abortion will be illegal in this country forever.