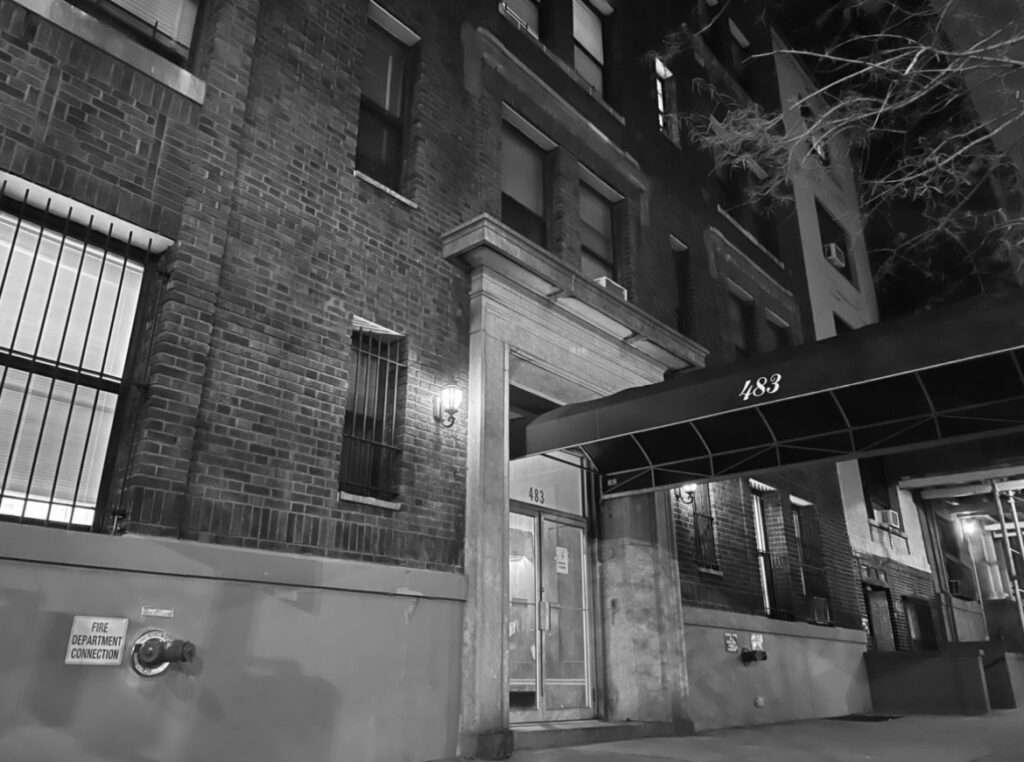 A housing shelter in Manhattan’s upper west side at night. [Credit: Ben Shimkus]

(NEW YORK)—Jeremy has harsh hands. The cracks appearing on his knuckles looked painful. His palms were calloused, a product of having to move all of his belongings. His fingernails are yellowing with dirty tips.

As he reached into his Columbia bag—one that he confessed he stole a few years earlier – to show his assortment of belongings, holes around the sleeves of his t-shirt appeared. He pulled out a folded cardboard sign that read “HOMELESS NO FAMILY PLEASE HELP THANK YOU GOD BLESS”.

When asked about the last time he had a permanent place to stay, Jeremy said, “I don’t remember what it’s like to have a home, I’ve been struggling, man. Every day is a struggle.”

Jeremy—a middle-aged, former restaurant kitchen worker who only wanted to reveal his first name — said he has been homeless in New York for more than five years. After falling on what he describes as “hard times,” he has found it impossible to find consistent housing in the city.

His struggle isn’t for lack of trying. Jeremy said he has connected with housing assistant agencies in the city. He has applied for jobs, none of which seem willing to hire him. He is a living example of a shelter candidate that the city is supposed to be serving.

According to the most recently available public data, more than 50,000 individuals are accessing New York shelters each day. The majority of people accessing daily shelters look a lot like Jeremy — typically they’re single males seeking housing without other family members. The city has long promised to build more shelters  — including Mayor Adams’ proposing 1,400 new shelter beds throughout the city. Paradoxically, the shelters have gotten more violent and thus distasteful to residents in proposed shelter areas.

The number of deaths among people experiencing homelessness has risen from 2005 to 2021.  The NYC Department of Homeless Services reported a sharper increase than the NYC Human Resources Administration reported. [Credit: Homeless Deaths Report/NYC.gov]

The shelters have not been a solution for Jeremy. He said some of his worst experiences have happened in city shelters. He has witnessed violence, assaults, and overdoses multiple times over in many of the city’s facilities.


He said the last time he was in a shelter, he watched someone get stabbed. He swore shelters off immediately after. His story follows a greater trend in New York City.

2021, the deadliest year on record in NYC shelters

According to the report:

As more deaths occur in those shelters, fewer people are incentivized to receive services. This compounds distrust in the shelters. 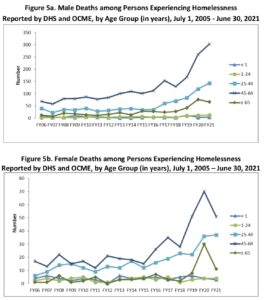 Two charts comparing the number of deaths of males and females experiencing homelessness between 2005 and 2021 [Credit: Homeless Death Report/NYC.gov]

“There are a lot of people who are resistant to the sheltering system and how it currently works,” said a city outreach worker, Allie (not her real name), who spoke to The Click only on terms of anonymity. “There are people who have had really bad experiences in the shelter. This is not true of all shelters, but there are many that are quite dangerous.”

Allie said that a woman she was trying to connect to housing refused, saying that she was stabbed the last time she went into a shelter.

“There are congregate settings where people might be sleeping with tens of other people in the same room and everyone is coming into these facilities at very different places in their own mental health and substance use journeys,” Allie said. “It is understandable why some people feel safer sleeping in a subway car. People sometimes would rather sleep on the street than in a shelter.”

Another woman turned down a spot in a shelter because she had been sexually assaulted in the facilities, Allie said. Sexual assault in the sheltering system is a well-documented problem in the city.

“Every single shelter should be required to have an overdose prevention plan,” Sam said. “Right now all the shelters are required to have a fire safety plan. No doubt that it has saved lives, there hasn’t been a catastrophic fire in a shelter in the last 35 years I’ve been doing this. But thousands of people have died of overdoses. A sensible thing to do would be for everyone to have an overdose prevention plan in place too.” 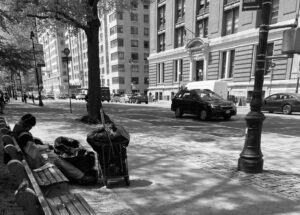 A person experiencing homelessness sleeps outside of Central Park with all of their belongings. [Credit: Ben Shimkus]

Sam pointed to multiple failures of policymakers that contributed to the crisis at the shelters.

There is an absence of naloxone – the drug used to treat narcotic overdoses- in  some facilities. If naloxone is present, it’s not guaranteed that shelter staff is trained to dispense it. This may have contributed to the 81% increase in overdose deaths in 2021.

“A big part of the problem in New York is that everything gets so siloed,” Sam explained. “ I think what should really be happening with these types of programs is that shelter providers, safe haven providers, safe injection sites, all the groups that are involved in a person’s life should be having case-specific conversations around plans. That just doesn’t happen.”

Many shelters have extremely restrictive rules – many require sobriety, have a curfew, and don’t allow pets – according to Allie. These rules don’t comply with the life that some unhoused individuals are presently living. These rules have the implicit impact of deterring individuals from shelters.

The violence in the shelters has spilled out into the streets of New York and has made the general public extremely wary of the homeless population. Headlines like the death of Michelle Go — a victim allegedly pushed to her death on the subway by a homeless individual, the killing of two unhoused people in New York and Washington D.C. and the murder of Christina Yuna Lee have forced the public to reevaluate their stance on homelessness. 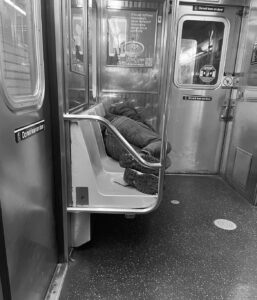 An unhoused individual sleeps on the subway. [Credit: Ben Shimkus]

In response, New York is becoming increasingly dependent on its homeless shelter system. According to Mayor Eric Adams’ Subway Safety Plan, shelters are a key component of getting violent individuals out of the subway. When the city clears out homeless encampments throughout the city, these people are often forced to enter the violent system against their will.

Meanwhile, plans to build more shelters in New York continue to falter, as communities are beginning to fight back against the construction of new facilities.

The implications of these decisions are having a devastating impact on institutions that were already struggling to handle multiple crises at once. As they continue to fail, the burdens of this crisis fall harder on the homeless community that policymakers have not seemed responsive.

The Click reached out to elected officials for comments on policy. They have not responded by press time.

No matter how insistent the city remains in policies that attempt to move more people to shelters, it remains extremely unpopular with the individuals who are most likely to use it.

Jeremy remains steadfast in his refusal to go back to the shelter. His trauma from past experiences will stick with him forever.

“I don’t want to ever go back,” Jeremy said. “I would rather die than have to spend another night in a shelter.”


Editor’s Note: Of the seven people interviewed for this article only three of them agreed to go on the record, each asking for some level of anonymity. Those experiencing homelessness expressed reservations because they didn’t want to draw attention to their situation. The individuals working for governmental organizations feared job loss, particularly under the Adams administration.