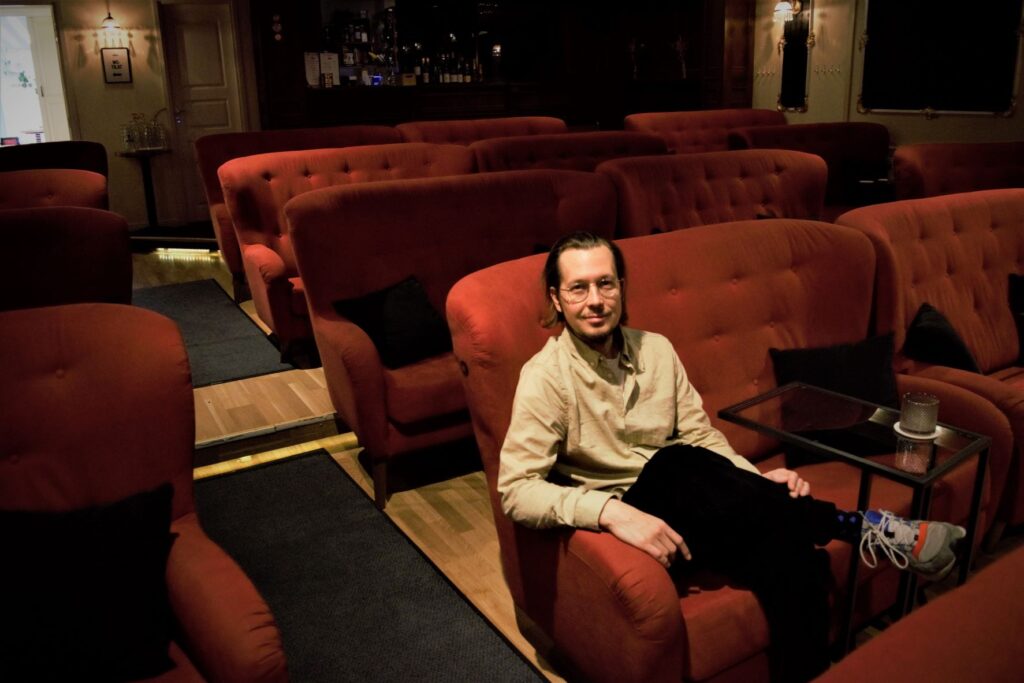 Becoming an Entrepreuner Was a Prolonged Dream For Atte Laurila. [Credit: Sanna Voltti]

A Small Helsinki Cinema Is Thriving After Lockdowns End

(HELSINKI, Finland) — A small movie theater in the heart of Helsinki took a hit because of the pandemic. But now that lockdowns have ended, business is booming as movie lovers return to the big screen.

Riviera is located in a lively, spirited district called Kallio that’s full of bars, restaurants and boutiques. The small cinema has a bar serving drinks and food, a setup that’s not common in Finland.

The owner of Riviera, entrepreneur Atte Laurila, answers the door to the cozy, warm little theater. The first thing you see is the bar, then books and posters about movies. The 59-seat theater is in the back. 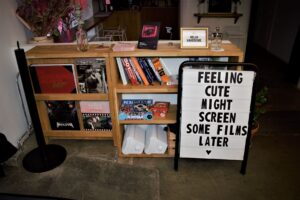 Riviera has a lot of movie themed books and posters. [Credit: Sanna Voltti]

Like every other business in the industry, Riviera suffered because of the pandemic.

Restrictions to control the epidemic changed frequently during the last year and a half. Riviera had to lay off members from the staff of 10 people, and they also closed and reopened several times during the pandemic.

“We always figured out different ways to run the business. We closed only for short periods, one or two weeks at a time,” Laurila explained.

In fact, the pandemic gave time to improve the business.

“We solved many problems during the pandemic. We have a much better flow now,” Laurila told The Click. “Now we are transitioning to a new phase, which is growing the business.”

Riviera received financial support from different organizations. Nevertheless, money was tight. In 2019, the company called Riviera Kallio Oy’s net revenue was around $1.4 million. In 2020, it was about half of that.

Now, things are looking up and customers have found their way back. According to Laurila, user traffic on the website is currently five to 10 times bigger compared to 2019.

“Sales are on a totally different level now,” Laurila said. “People have gone wild. Never before have we sold out this many shows weeks from now.”

Big hits as of press time are the new James Bond movie and recent Cannes Film Festival winner, “Compartment No.6” (a Finnish film).

Owning a Business Was a Dream Come True

Laurila said he always wanted to start his own business. He used to work in the movie industry in a film-production company located in Helsinki. After years in the field, he decided to make something happen for his dream. He participated in a cultural project, which allowed him to spend a lot of time in New York City.

“The atmosphere of the city, that everything is possible, really affected me. It encouraged me to try this out,” he said.

The idea of a little movie theater originated in New York when Laurila spent time in cinemas with his friend who lived in Brooklyn. One source of inspiration was Nitehawk Cinema in Williamsburg, which was one of the first movie theaters to offer drinks and food in New York. Besides Nitehawk, the whole city itself worked as an inspiration. 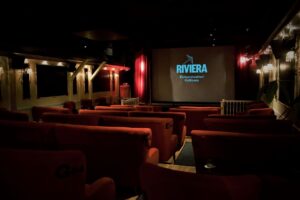 “I wanted to do something inside the movie business, but I wanted to find an area of the field where I could do things differently,” Laurila tells The Click. “Displaying movies myself started to feel really interesting.”

Back in Helsinki, Laurila found business partners and a space he could start the business in. One thing led to another, and Riviera opened its doors in 2016.

Even though Riviera is an individual little theater, it doesn’t really have to compete with big chains, according to Laurila. For example, the Finnkino brand owned by AMC Theaters has a different kind of business model.

“I’m happy with how well we have preserved our place in the industry. Other entrepreneurs and companies wanted to do the same as we did after we started,” he said.

There are a couple small cinemas with a bar in Helsinki. In general, places like Riviera are not common in Finland. Other businesses have tried to follow Riviera’s lead, but nothing is quite similar to Riviera, according to Laurila.

“We are focusing on the things we are good at. I try not to think about the competition too much,” Laurila said.