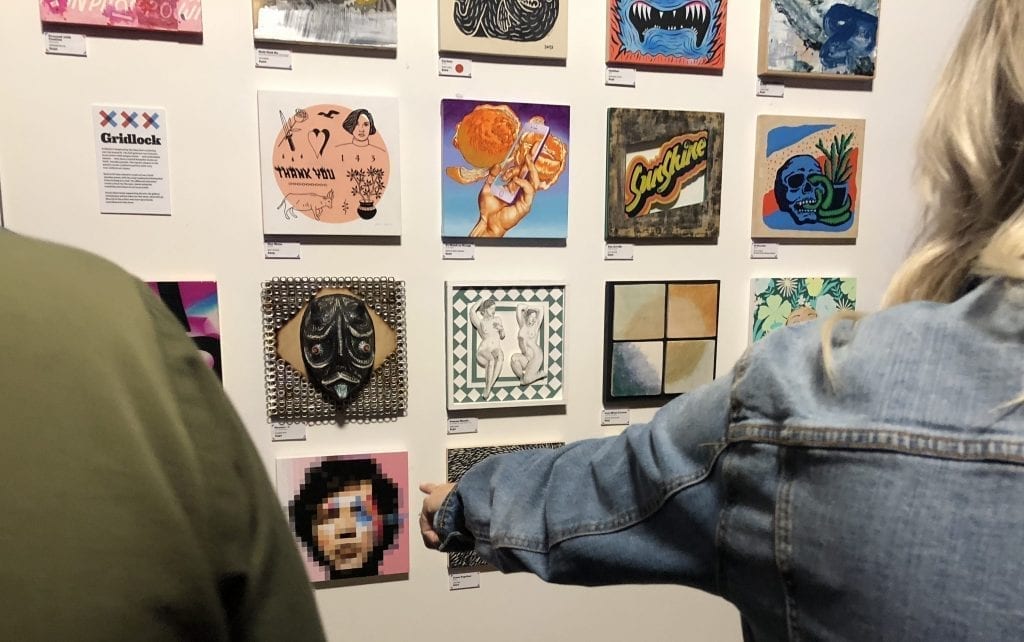 LOUISVILLE — It’s 8 p.m. and, just off of busy Frankfort Avenue and up a flight of stairs, the DJ turns up the music and the event shifts from quiet, ordinary art show to party scene. Filtered images project behind the DJ, and the lights dim while attendees crowd into the bar area and families with children begin to head home. The Forest Giant offices are full of artists and admirers for the design and technology agency’s second annual Gridlock art exhibition.

Near the entrance, around 40 12-by-12-inch pieces of art hang in neat rows, making up the namesake gridlock and feature of the art show. The collection covers a range of themes and mediums — a portrait of Mr. Rogers, a fox peering into a softly glowing burrow in the snow, a three-dimensional tribal mask, and art in the distinctive styles of graphic design illustrators and American traditional tattoo artists (many of whom participated). Together, they showcase the diversity of Louisville’s art community. 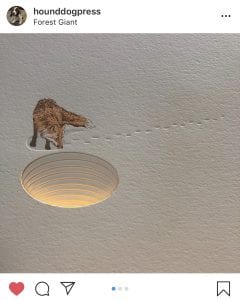 Forest Giant,  the firm driving design and product for the likes of GE, Brown-Forman and UPS, is a design-driven agency with a number of artists on staff, explained Interactive Designer Robby Davis. In addition to organizing the art show, Davis is the artist behind the distinctive packaging for Against The Grain brewery’s principle beers, and has worked on projects for Mountain Dew, and Forecastle Music Festival, among others.

Last year after settling into their new space, the team decided to revisit the art shows they once hosted. Rather than dictate a theme, they wanted to invite artists to participate with loose parameters — be part of a project, without being constrained by a theme. Past shows included a forest theme, to play on the company’s brand. Gridlock invited artists within the staff members’ network to create an original work on 12-by-12 inch wooden panels and price it for sale, with full proceeds of the sales going to the artists.

“We’re a lot of artists that work at Forest Giant — a lot of the shows that we participate in, they take 50% or 40% of the cut,” Davis explained. “So, we just wanted to kind of throw a party and you know, show appreciation to the art community. We didn’t take a cut from the artists — it’s more of a celebration of the art scene and in Louisville, versus us trying to profit on it.”

Kendall Regan, an artist who has worked in chalk art, installations, graphic design and branding, is one artist featured in the showcase. Regan’s work sold the night of the show, her first non-commissioned piece to be purchased in a gallery setting.

After moving from Louisville to San Diego, she found reminders of her old home that she channeled into her piece as illustrations on a pale blue background.

“While on a walk through my neighborhood, I walked past a home with two large ceramic boots, doubling as planters for some type of cacti. Then it dawned on me — country life,” Regan explained. “From there, the concept snowballed. I tried to capture the most definitive characteristics of Louisville, like ‘Seasonal Depression,’ which I think most native Louisvillians can relate to, and “4:00 AM Last Call,” a concept that I never truly appreciated or understood how entirely unnecessary it was until I left home.”

While the first two Gridlock showcases primarily featured Louisville artists by invitation, Forest Giant wants artists outside of the network to participate, as well, Davis explained.

For more information on the show and how to participate, you can contact info@forestgiant.com.