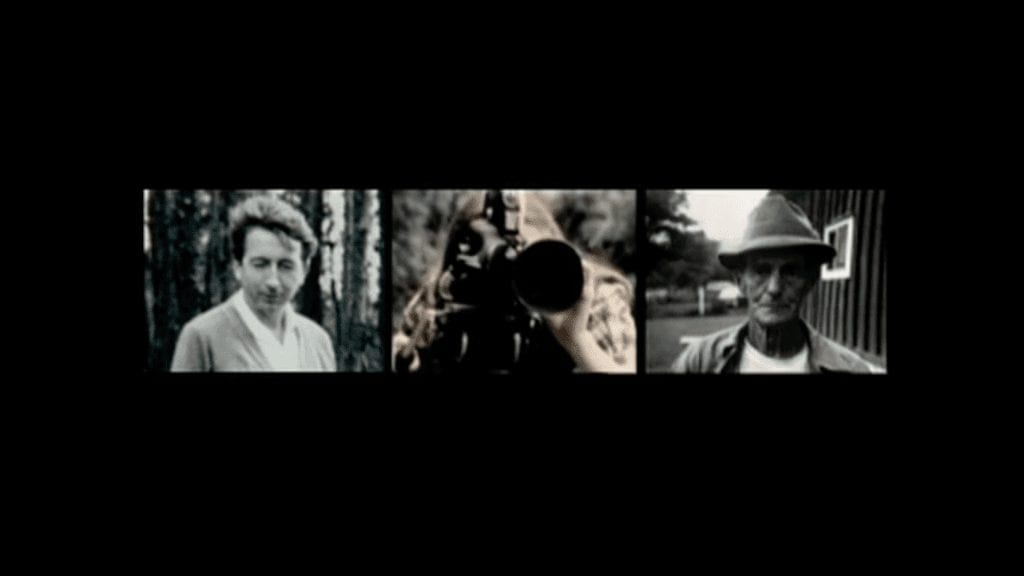 The closing montage of “Stranger With A Camera” (Appalshop / Elizabeth Barret)

In ‘Stranger with a Camera’ Filmmaker Re-examines Community’s Past

In late September, 1967, Canadian journalist Hugh O’Connor was shot and killed outside of a home in Jeremiah, Kentucky. The latest in a string of reporters who’d trekked into Appalachia to report from the epicenter of crushing labor and poverty, O’Connor was a victim, in part, of growing resentment of the media in the wake Appalachian portrayals and coverage from the War on Poverty.

“I grew up in a place inundated with picture-takers,” Barret says in the film, which then cuts to footage from the BBC of dirt roads dotted edged in gutted cars and small wood-sided homes. “What is the difference between how people see their own place, and how others represent it?”

Later, CBS News Special Report “Christmas in Appalachia” shows Charles Kuralt walking in a big coat. “This is the road — if you can call it that — that leads to the Pert Creek School in Letcher County, Kentucky,” he says. “Beside these roads, the shacks of tar paper and pine, which are the homes of a million permanently poor.”

The shooter, Hobart Ison, would go on to say that the weight of what Ison’s attorney Ronald Polly described as ridicule — of Ison’s property, integrity and way of life — was a result of the media impact. He claimed that this led him to pull the trigger as he yelled at the crew to leave his land after they stopped to photograph a coal miner, covered in black dust, holding his baby while he sat back in a rocking chair on the front porch of the home he rented from Ison.

Decades later, filmmaker and local resident Elizabeth Barret would continue to think about the fate of the two men, who met and parted just a few miles from where Barret was finishing high school. Her understanding of the event was split between her position as a documentarian herself, and that of a local. She understood that her community had long been misrepresented in the news and on television, but also identified with the role of storyteller and filmmaker. She revisited the murder, the growing tension that led up to it, and the trial that followed in her film “Stranger with a Camera,” which premiered at the Sundance Film Festival in 2000 and was later featured on the PBS series P.O.V. Almost 20 years later, the film continues to screen across the country — it’s a primer on the power and pain that storytelling can have, and a case study for ethical reporting on communities that lack mainstream representation.

To examine the story and her role in the balance between the media and the community, Barret sifted through the images of poverty that fed Ison’s indignation and drew O’Connor to the town, and she interviewed the mens’ family members and the witnesses to the murder. Ison himself could not be interviewed — after pleading guilty to involuntary manslaughter, he served one year of a 10-year sentence before being released on parole. He died just nine years after O’Connor.

“The story of the murder cast a shadow over our work,” Barret says in the documentary. “Hobart Ison had killed a man who came on his land with a camera. Now we were the ones with the camera.”

As a filmmaker and a local, Barrett sits on both sides of the conflict. Whether or not she began the film with the intention of advocating for either side, I think the result would have been the same. Of all of the people Barret interviewed for the film — the miner whose image O’Connor sought to capture, the crew, the family members of both men, attorneys, locals, and journalists — the consensus is that the event that ended O’Connor’s life was tragic, but complex.

By exploring the charged atmosphere that enveloped Ison and O’Connor’s crew in Jeremiah that day, Barret has crafted a compelling feature that, by its nature, stokes sympathy for both sides: the man who by all accounts was a good, talented journalist, and the man whose extreme actions many understood and even lauded. Between the two men, the conflict of the story’s subject versus the storyteller.

“It doesn’t matter whether they intended to ridicule, it’s how it came out… Nobody has ever tried to whitewash Hobart Ison. But it is very clear that what went on that day was not all Hobart Ison’s fault,” one of the interviewees says over a black and white clip of children playing by a dilapidated front porch from National Educational Television’s “Appalachia: Rich Land, Poor People.”
“A camera is like a gun,” are striking words in the film. Colin Low of the National Film Board of Canada and O’Connor’s colleague continues, “It’s threatening… it’s invasive; it is exploitative, in terms of mass media, and it is not always true. It can be editorially manipulated into anything the maker wants to say.”

The film revolves around a single event – the killing of Hugh O’Connor – but it’s overwhelming moral statement paints both O’Connor and Ison as parts of a machine that had long ago begun to take victims in the region, a sensationalized story of abject poverty that played well to television viewers across the continent. In “Stranger with a Camera,” Barret became an advocate for her community and the complicated truth that has left a lasting mark, but also for herself in this dual role behind and before the camera. But in the quest to find what it is that hangs in the balance between the observer and the subject, no answer is simple enough:

“Sitting there with [O’Connor’s daughter], I was the stranger with a camera,” Barret says as the film closes. “She had come to a place of resolution. But I have not. I live every day with the implications of what happened. This is my community. My life is here. As a filmmaker, I have the responsibility to see my community for what it is. To tell the story, no matter how difficult… Hobart Ison was wrong to kill Hugh O’Connor, but saying that is not enough for me. It is the filmmaker’s job — my job — to tell fairly what I see. To be true to the experiences of both Hugh O’Connor and Hobart Ison. And trust that, in the end, that is enough.”