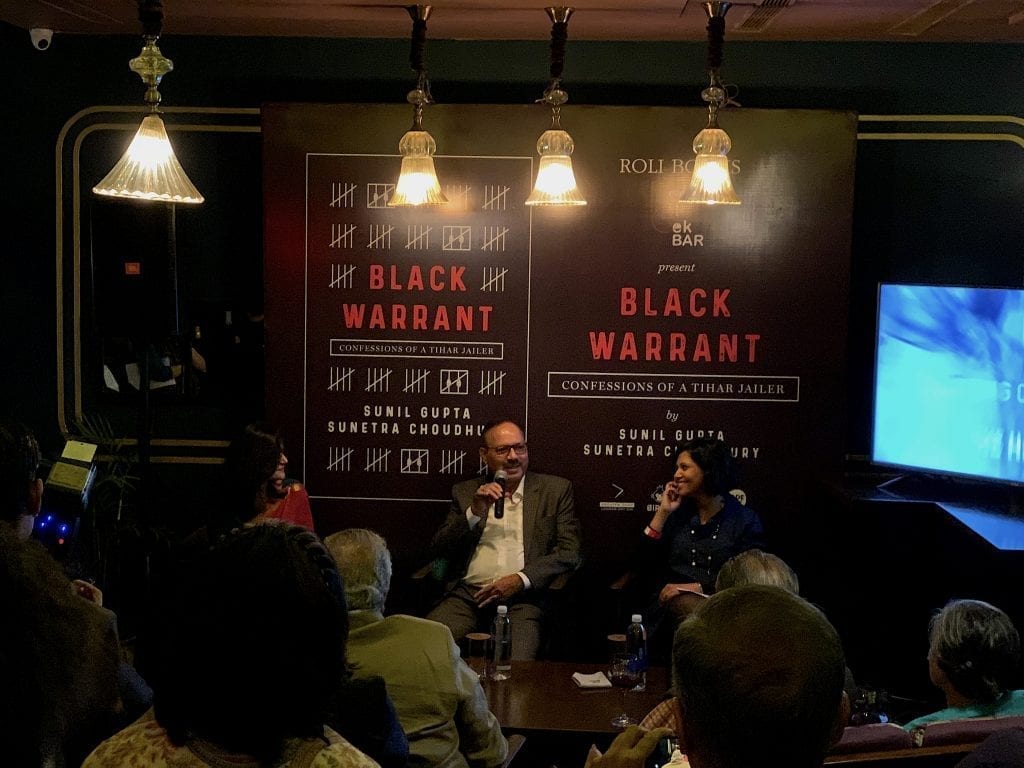 Pragya Tiwari moderated a discussion between the two authors about the book’s coverage of high-profile criminal cases.

“Black Warrant” is the name given to the warrants for death penalties. Gupta oversaw eight Black Warrants during his tenure at Tihar. Indian law administers capital punishment by hanging.
The discussion focused around the human dynamics within Tihar. “These are ordinary humans who must take someone’s life,” said Choudury. Therefore there are rituals to normalize the process. For example, a bottle of Old Monk (Indian rum) is always given to the hangman, said Choudury. “Because the assumption is that no one who is sober can carry out a hanging.”

Tihar is home to 16,000 prisoners spread across 400 acres, according to India Today.

Tiwari challenged Gupta about the widely acknowledged corruption within Tihar Jail. Wealthy prisoners are given the privileges of more space, cleaner quarters and access to outside goods, including alcohol, Tiwari said. At the same time, poor prisoners are packed in cells.

Black Warrant was released by Roli Books in November 2019. Video by: Christina MacGillivray.

Black Warrant immediately hit the top 10 bestsellers list in India’s the Deccan Chronicle. “This is the first time in India we have someone demystifying the story from inside Tihar,” said Priya Kapoor, Director at Roli Books, the publisher of Black Warrant in an interview with the Click. “We aren’t used to information being shared here. You hear of so much brutality [in Tihar]. Our prison system is geared to the rich and powerful.”

The success of the book may also be credited to the dynamic between Gupta and Choudury. Gupta’s transparency about his personal relationships with prisoners contrasts with Choudury’s skepticism as a journalist who has covered many of the criminal cases over two decades.

“I couldn’t take [Gupta’s] narrative about Manu Sharma,” said Choudury referencing Gupta’s account of Tihar prisoner Manu Sharma. In 1996, Sharma shot a young woman point-blank in the face. Despite dozens of witnesses to the murder, Sharma almost got away with it because of his high profile political family threatened witnesses with violence, bribed the police and bought the judicial system. “We are conditioned to hate Manu Sharma. But the interesting thing is to understand Sunil Gupta’s point of view.”

Tihar officers spend more time with the prisoners than with their own families, Gupta said. In an environment of hostility, violence, rape, and negativity, any prisoner who does not cause a problem makes a jailer’s life a bit easier, said Choudury. “If [any prisoner] behaves himself, if he makes the everyday life as a jailor easier – he’s an ok guy.”

Gupta witnessed Manu Sharma reform in Tihar over a decade of close interaction. This process contradicted the outside world’s narrative that Sharma was a monster beyond redemption, said Gupta.

“Whenever a prisoner comes there – he might be dangerous outside but when he is in our custody – we treat him as a part of our family,” said Gupta. “The function of the jailer is to not see his crime. Not to hate the sinner but to hate the sin.”