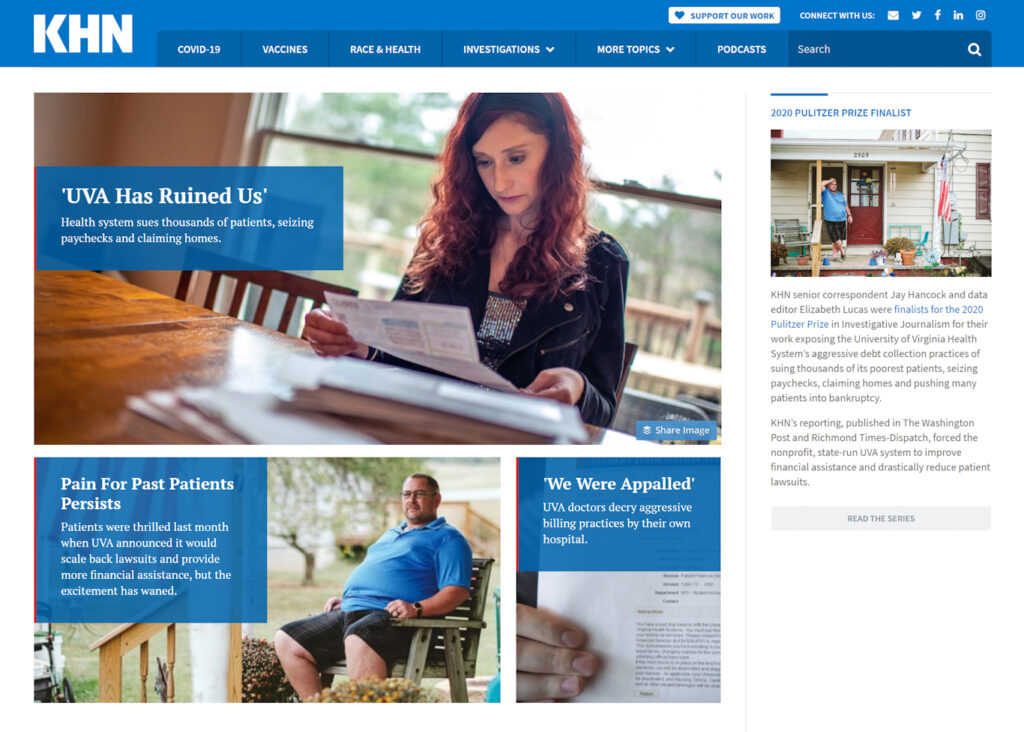 When Investigative Health Journalism is Advocacy, the Little Guy Wins

When Jay Hancock and Elizabeth Lucas, writing for Kaiser Health News (KHN), dug into how a top Virginia nonprofit hospital sued thousands of uninsured patients and their families into bankruptcy, the pair almost came away with the 2020 Pulitzer Prize in Investigative Journalism. But by calling out predatory behavior by the nonprofit state-funded University of Virginia Health System (UVA), Hancock and Lucas’s investigation also counts as a powerful example of advocacy journalism.

The seasoned journalists used court records, documents, and interviews with hospital officials and patients to uncover problems at UVA. Through their investigation, they were able to prove that UVA used aggressive litigation to chase down millions of dollars owed to it for unpaid medical bills by patients unable to meet its severely restrictive financial assistance eligibility guidelines. The sheer number of lawsuits and liens filed by the hospital and the devastation it wreaked cried out for action in ways a more biased, outraged writing style would have been unable to accomplish.

When Hancock and Lucas discovered that UVA was destroying lives through its aggressive collection tactics, they leaned in through dramatic anecdotes and examples highlighting the worst cases. They relayed the individual stories of patients crushed under hundreds of thousands of dollars in medical bills. Peppered throughout were contrasts between the high numbers of court cases UVA brought against its patients and the far smaller numbers of lawsuits other aggressive hospitals were filing.

KHN is backed by the Henry J. Kaiser Family Foundation (KFF), an endowed nonprofit foundation-turned-charity that produces policy analysis, polling, and social media campaigns in addition to the journalism produced by KHN. KFF president and CEO David Altman describes KFF’s role as a kind of health system watchdog, “We don’t think better information is the answer to everything that ails our country or our health system; we do believe it can be a counterweight to the money and politics and misinformation that often dominates health policy.”

But addressing objectivity and advocacy in journalism in an essay for Media Ethics Magazine, Matthew H. Reavy, an associate professor and chair of the Department of Communication at the University of Scranton, writes, “Advocacy journalists distinguish the ‘good guys’ from the ‘bad guys’ and ‘actively participate in the debate, becoming more activists than observers of the events’ (Ruigrok, 2010).”

Acting as a counterweight for money and politics distinguishes between “good guys” and “bad guys,” and when UVA did not immediately resolve the problems that Hancock and Lucas pointed out in their original investigation, the journalists reacted through additional reporting. They covered the call for the hospital to change from Senate Finance Committee Chairman Chuck Grassley (R-Iowa) and the silence from the American Hospital Association, a trade group to which UVA belongs, over its members’ aggressive collection tactics. When the UVA continued to milk patients for bills through the kinds of property liens highlighted in the initial investigation, despite promises to the contrary, Hancock and Lucas pointed this out as well, ensuring the patients’ struggles with the hospital continued to be seen but also casting UVA as the villain in a drama of debt collection run amok.

This year UVA finally announced it would drop its lawsuits in line with promises it had made in response to the outcry and attention from Hancock and Lucas’s original investigation. Of course, Hancock and Lucas, spotlighting that their idea of justice has begun to play out, reported on this announcement as well.