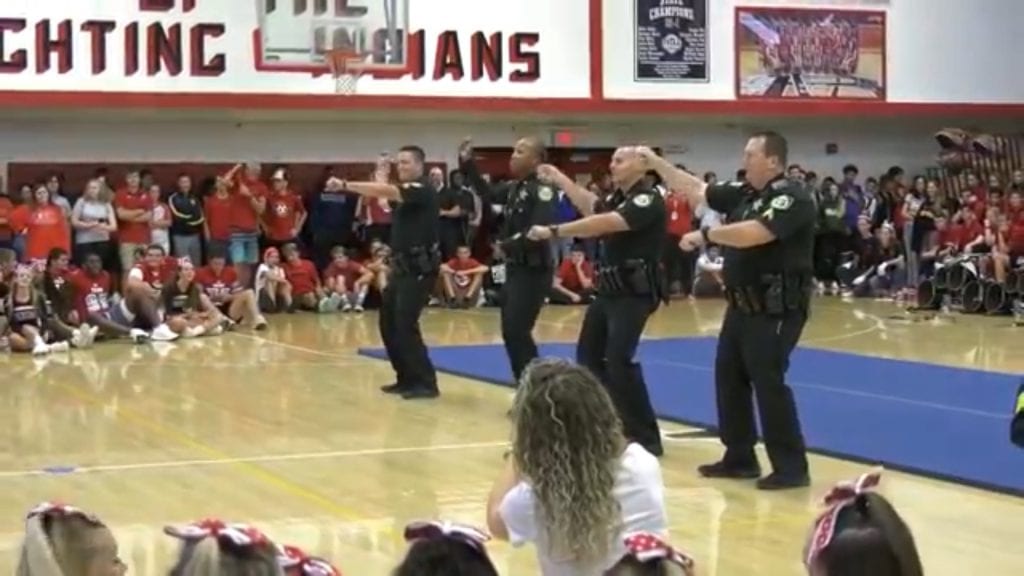 Is There Still a Point to the Pep?

VERO BEACH, Fla. – Some aspects of life are simply American: Memorial Day, a hot dog, college football, Bruce Springsteen. Combined together and wrapped in a giant bow of red, white, and blue, they embody the very ethos of our culture. But when does an American thing turn into a thing of the past? Do certain traditions still have a foothold within our culture?

On September 13, inside the school gymnasium, Vero Beach High School hosted the first of two annual pep rallies. The homecoming show, performed twice in front of a split student body, lasted 45 minutes. The routine quickly found an afterlife on social media. A video posted on the School District of Indian River County Facebook page had more than 9,000 views and over 150 shares from a single post. A YouTube link had more than 20,000 views. Students, teachers, and parents posted their versions to Snapchat, Facebook Live, and Instagram. All of this viral attention was just for a high school pep rally. Precisely, what kind of a spectacle were they throwing at this school?

It turns out the main attraction involved a hit country song, as well as local law enforcement doing the two-step. Cheerleaders and football players danced together on the basketball court before they scrambled off to the sidelines to make way for the men in uniform. Four police officers performed a dance routine to Blanco Brown’s “The Git Up,” the number one song on Billboard’s Hot Country Songs for 10 straight weeks.

“It was a little nerve-racking. You can’t make any mistakes!” said one of the dancers, Maj. Milo Thornton of the Indian River Sheriff’s Office. Thornton was asked to dance by Toni Kouns, the high school varsity cheerleading coach. “I do a lot of community stuff, so of course I agreed to do it,” he said.

To shimmy, hop, and slide in front of a student body that totaled nearly three thousand is not easy. But for Thornton, the message he and his officers sent was more important than any potential dance misstep. Thornton explained, “It not only helps us to continue to build a relationship with kids in the community but also shows we aren’t always business. Our job is to both protect and serve. People sometimes forget the serving part of it. It makes us approachable.”

An established relationship between the community, the school, and the students is a priority. Kristi Odom, a P.E. teacher and alumni of VBHS, has seen the average high school experience change throughout her 15-year career. “It’s a different time to be a student. There aren’t a lot of fun things to look forward to.” The 2016 Teacher of the Year pointed out that several of the current teachers and staff are alumni. When asked if pep rallies still play an essential role, Odom said, “If we don’t promote school spirit, it will go away.”

Perhaps ‘school spirit’ has a deeper meaning than the image of happy cheerleaders yelling for a touchdown. Maybe the tradition, one that seems so crucial to alumni and teachers and parents, is not the actual pep rally but rather the sense of community and connection. According to CNN.com, there have been 22 school shootings in 2019. The Journal of the American Medical Association released a report this summer stating suicide rates among adolescents, and young adults have reached the highest levels in two decades.

A pep rally won’t solve those issues. However, they might be one of those American things that still holds weight. Thornton certainly believes that. “Vero is like no other place,” he said.  “Tradition holds here. There is value in that.”