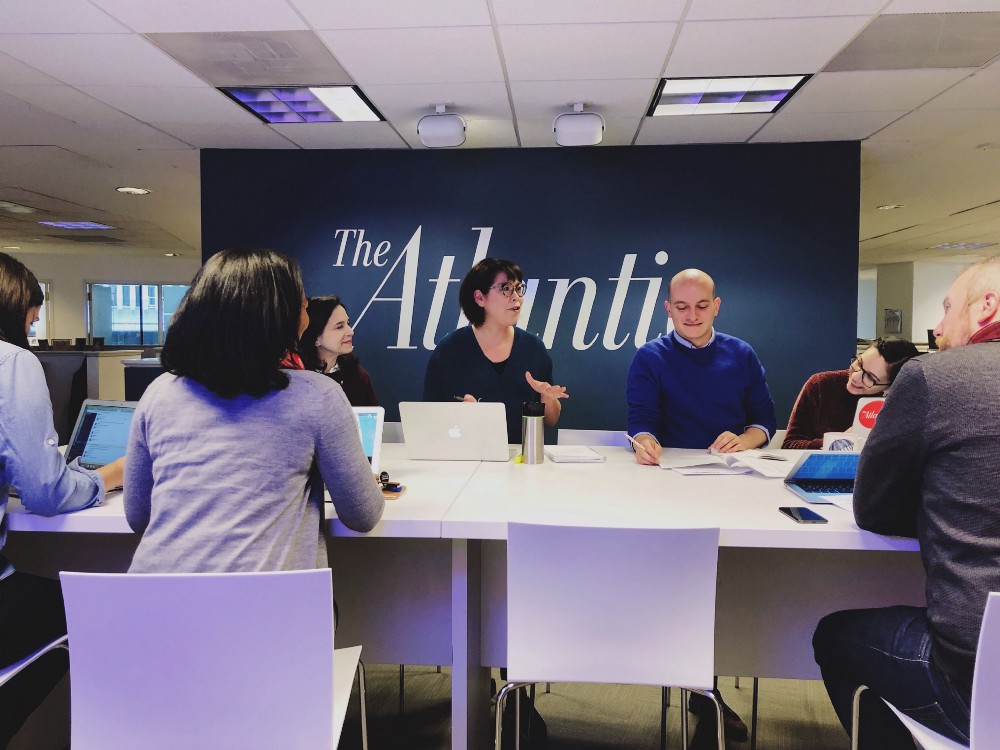 Margaret Myers talks during a meeting at The Atlantic. [Credit: Angela Wu]

Lessons from a Career in Journalism

(SOUTH BRUNSWICK, N.J)— Margaret Myers is a managing editor for Atlantic 57, a consulting division of The Atlantic. There she manages The Renewal Project, a digital platform for Allstate. Before joining The Atlantic, Myers was an editor for PBS NewsHour and for ESPN. Early in her journalism career, she worked as a reporter in Mexico City and Guatemala. She is the past president of the Society for Features Journalism. Myers spoke with The Click about how she brings the skills she developed as a reporter and editor to her current work.

Margaret Myers: I graduated in 1999 with a degree in anthropology. I moved to Latin America and worked with an English language newspaper called “The News.” I was in charge of the lifestyle beat, where I wrote about the arts and culture of Mexico City. I went to the premiere of “Frida,” and Salma Hayek was there.

The Click: Was Mexico your first choice to work?

Myers: I went to Latin America because I had a friend who had a job at the Associated Press. He invited me down, and I never left for years.

The Click: Was the Mexican newspaper company similar to the U.S news? Did you notice any different laws?

Myers: When I was in Mexico, there was a sense that as editors, we were pressured at times, at the business department and the newspaper, to cover certain politicians in a certain way. I lived there when there was a change in political leadership. Mexico had for seven decades one-party rule that was called the PRI. When I got to Mexico City, the opposition party, the PAN, had just won the election. For the first time in Mexico, they had another party ruling the country.

The Click: Was it dangerous reporting the news in Mexico?

Myers: No, because I was on the arts and culture beat. Certainly, I have friends in the media who have covered much more dangerous topics such as drug traffickers.

Myers: At Atlantic 57, I lead an editorial initiative called The Renewal Project. In this instance, I’m using my journalism skills as an editorial consultant. I work with Allstate to tell stories.

Myers: I worked as a journalist for almost 15 years. Now, I work with people who have different skills like product managers, project managers. It brings a diversity of ideas to the work that we do.

The Click: What’s the process, how long does it take to get a story together?

Myers: The story process starts with pre-reporting— reading everything you can find on the topic and person you interview with. From there, it’s setting up interviews with the right people, making sure you’re talking to a diversity of voices.