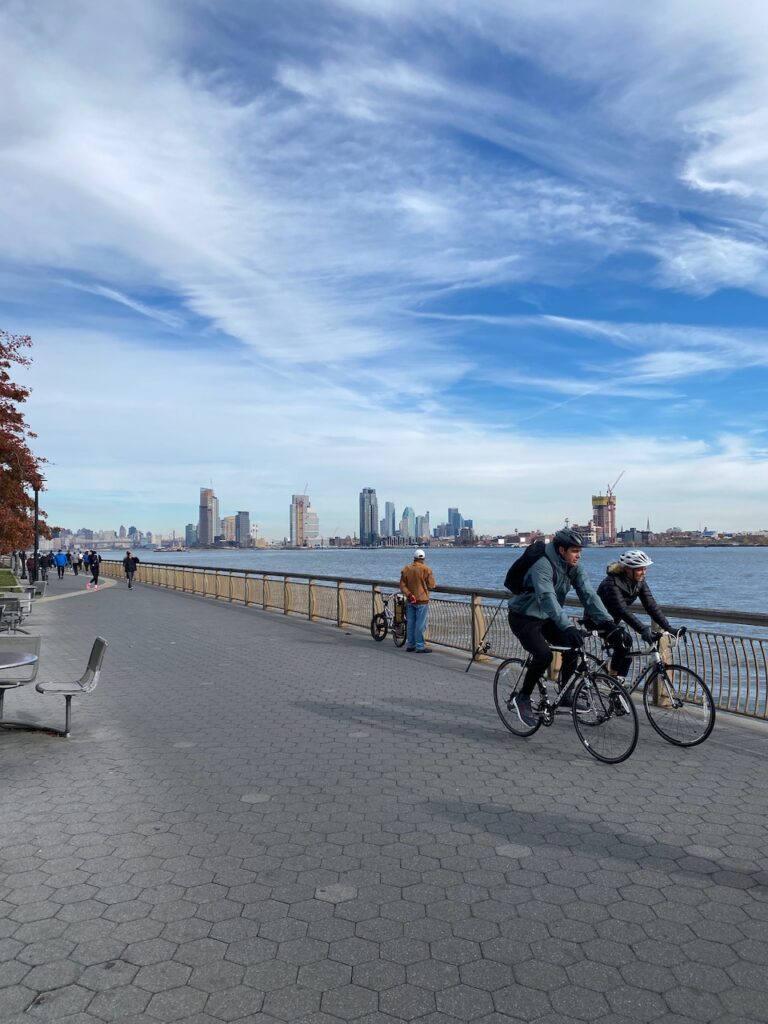 Frustrations Bubble at a NY Park Being Renovated for Climate Change

Locals cheered on school soccer teams while joggers, dog walkers, and strollers competed for space along the riverside path. This burst of life made it hard to guess it was the first near-freezing day of the season. For many living downtown, the park is a crucial connection to each other and to the city they call home.

But juxtaposed with the flow of people were yellow stickers plastered on fences and light posts that read “SAVE EAST RIVER PARK, DEMAND TRUE RESILIENCY.” This is the community’s response to the city’s $1.45 billion East Side Coastal Resiliency (ESCR) project to redesign the park’s infrastructure, improve access and create “enhanced public space,” according to the ESCR website.

The major project is part of the city’s plan to confront the growing risks of superstorms like Hurricanes Sandy and Ida, which demolished the coastline with flooding. Despite the urgency to address this symptom of climate change, residents have felt frustrated by disruptions of park services and what they call poor communication about the upheaval from city officials.

“There are always trade-offs,” Jess Benhabib, an NYU economics professor, said while on a walk with his wife, Madeline Benhabib. “Yes, flood levels will rise and the fact that people are thinking of prevention is a good thing, but you can’t evaluate it unless you know what they are going to do. I don’t know if there is enough discussion, communication exchanges that are filtering through.” 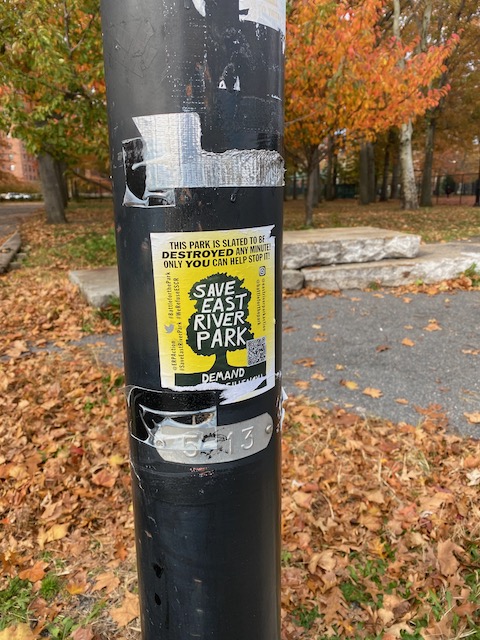 A Call for Community

Since the beginning, the project has faced challenges aligning with the community’s wants and needs. The original plan of completely closing the park during the renovations received criticism from locals and activist groups like East River Park Action.

In October 2019, a week after the ESCR’s approval, the administration of New York Mayor Bill de Blasio announced a revised proposal to keep 40% of the park open at all times through the duration of the project.

After approval, the city’s Department of Design and Construction (DDC), which is responsible for major infrastructure projects across New York, got to work executing their plan.

On their website, the project is described as both protecting “110,000 people from impacts of climate change” and improving the overall design of the East River Park and other recreational spaces throughout downtown Manhattan.

“We definitely recognize that this community is a dense urban area and these spaces are important,” Ian Michaels, the DDC’s public relations director, told The Click. “We aren’t just protecting people, we are improving a lot of these spaces. There are a lot of people who are happy with the improvements we are going to be making to the East River Park.”

The Click then asked Michaels how the DDC was working to shift community frustration and criticism of the project.

“Once construction starts, there is not a lot of input to be had. We do have an extensive community outreach and notification process, where full-time employees do nothing but inform the community about what’s going on and take complaints,” Michaels said.

Most recently, the DDC created a “Community Call for Art” to encourage community involvement and improve public opinion.

Students and local artists were asked to submit artwork themed around climate change. In December, a panel of local community board members will select submissions for installation along the construction barriers. The Click reached out to the DDC to confirm the date, but has not heard a response as of press time.

“There’s no way to say construction is not pretty,” Shoshana Khan, the DDC’s assistant public information officer, told The Click. “But what’s great about art is that it’s able to bring life to a space where it’s not so pretty. These are all students and the local artists coming together to say, ‘Hey, let’s create amazing pieces that will be displayed here for people that are walking by.’”

However, despite the department’s efforts to involve the community in this project, park guests told The Click they still find themselves confused about the project and its duration.

For the Benhabibs, the East Side River Park became a safe haven during the pandemic, offering a space of beauty and fresh air.

“One of the issues of Manhattan is there has been so much built on the West Side,” Jess Benhabib said. “This comes as a place to escape on the water. Everybody can run and walk. It’s very pleasant.”

Madeline Benhabib quickly chimed in after her husband.

“Its greenery and an escape from an overcrowded part of town,” she said. The recently retired violist has called New York home on and off for 70 years. “We started coming regularly during the pandemic … we now come once a week, sometimes more.”

The same sentiment was shared among others: the park is a consistent part of their routines.

Alisabeth Sabatelle, a 25-year-old public relations manager, stumbled upon the park during a long walk and has been coming back every day since.

“I feel like in New York it’s hard to find an area where you can spread out and decompress, especially after work when it’s a really demanding job,” Sabatelle said. 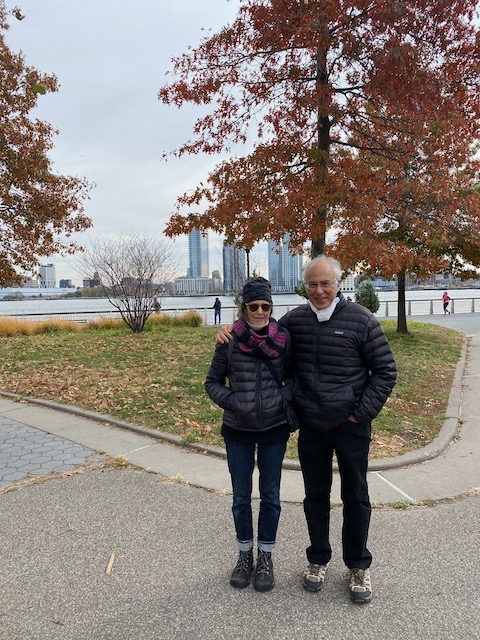 Despite how often both the Benhabibs and Sabatelle visit the park, they question the ESCR project’s purpose, goals, and timeline.

“Recently, we’ve been worrying about what this project will be,” Jess Benhabib said. “At one point I heard they were going to build barricades along the water; I thought that would be awful.”

The project does note on their website that they will be installing flood gates, but they will line the side of the park next to the FDR Drive parkway, not the water.

Sabatelle echoed similar hearsay. “I was under the impression for a while, one day this would be gone, which is obviously terrible,” she said. “I feel like it would be confusing to the community if you weren’t following the project at all.”

During an interview with the DDC, Michaels and Khan directed The Click to their website for further explanation on the project. But in Madeline Benhabib’s perspective, the site was difficult to navigate and didn’t provide the information she was looking for.

“We couldn’t decipher it properly,” she said. “There were no real details. They say they have a plan and there are a few pictures.”

At the heart of the miscommunication is the fear residents have of losing the routine that they are accustomed to, even if only for the short term.

“For those of us who use the park each week, we want to know how long it will take,” Madeline Benhabib said. “I’m going to be pretty old if it lasts several years.”

The Misunderstood Risks of Climate Change

The imminent climate change crisis was reconfirmed by negotiations from November’s COP26 Conference in Glasgow, alerting that the world is failing to limit warming by the necessary 1.5 degrees Celsius — a number known as the threshold before catastrophic consequences.

But according to NYU Professor Dale Jamieson, who has dedicated his career to the topic and is familiar with the park project living in downtown Manhattan, there is no simple solution to the ambitious problem — especially when taking into account what he calls the “misunderstood risks of climate change.”

Jamieson divides the concept into two categories: political (meaning crisis management by officials), and existential (describing the people’s fear of losing their meaning, purpose and way of life).

In terms of the ESCR project, Jamieson notes both political and existential risks to be apparent.

“The problem here is there is always a better way,” he said, describing ways of improving public opinion of mitigation projects. “Anything a large bureaucracy does that represents a ton of different interests is also going to do things that are clumsy.”

But at the same time, Jamieson makes the point that governments don’t hold all the responsibility for clear messaging, with community attention being equally important.

“It’s also true people tend to not really notice things until they find something incredibly disruptive going on around them,” he said.

In the case of park-goers like Sabatelle, many were unaware of the project’s timeline, or the project occurring in general, until parts closed.

“I would see ‘Save the Park’ stickers and people who had stands set up, but it seemed up in the air, like there was voting going on,” Sabatelle said about first becoming aware of the reconstruction. She noted for a while she wasn’t sure if it was going to happen at all, until the lower part of the park was blocked off one day.

While Jamieson notes that little can be done to encourage people when to start paying attention, he does believe there are questions that have not been clearly answered by the project leaders, particularly regarding the tradeoffs of time.

“This is kind of an environmental justice issue because many of the affected people are from public housing,” Jamieson said, continuing his thought with a hypothetical. “And then the other issue, which is more just head-scratching-ly difficult, is what might be protective for 50 years, might not be protective for 75 years and 100 years.”

Though the ESCR’s website offers a timeline and estimated completion dates, there is conflicting information. The site’s homepage notes the project will end in 2026, but when clicking on the site’s construction’s timeline tab, the completion of Phase 4 is said to be in late 2024.

Michaels told The Click that the ESCR is the “largest urban climate-adaptation project in the world,” adding that it’s the first of similar projects that will occur throughout the city.

In a way, this trend can be considered as infrastructure adaptation: The city is working to evolve its designs to align with future risks.

While Jamieson agrees adaptation is important, he also shared a need of transitioning from a reactive approach to preventative measures.

“What’s going to happen every 25 or 50 years is floods are going to come in and wipe out whatever you build there,” Jamieson said. “The claim, which I probably think is true, is that rather than engaging in the vulnerable retreat from these kinds of areas, we are still engaging in unmanaged events in ever-vulnerable areas.”

So yes, undoubtedly there will be more projects like the ESCR, protecting people from infrastructure decisions that put them in high risk zones. But, like the urgency of climate change, the community feels the same need for communication, especially when the projects risk disruptions to their daily routines.

“I think for something major like this, there should be a lot more discussion,” Jess Benhabib said.