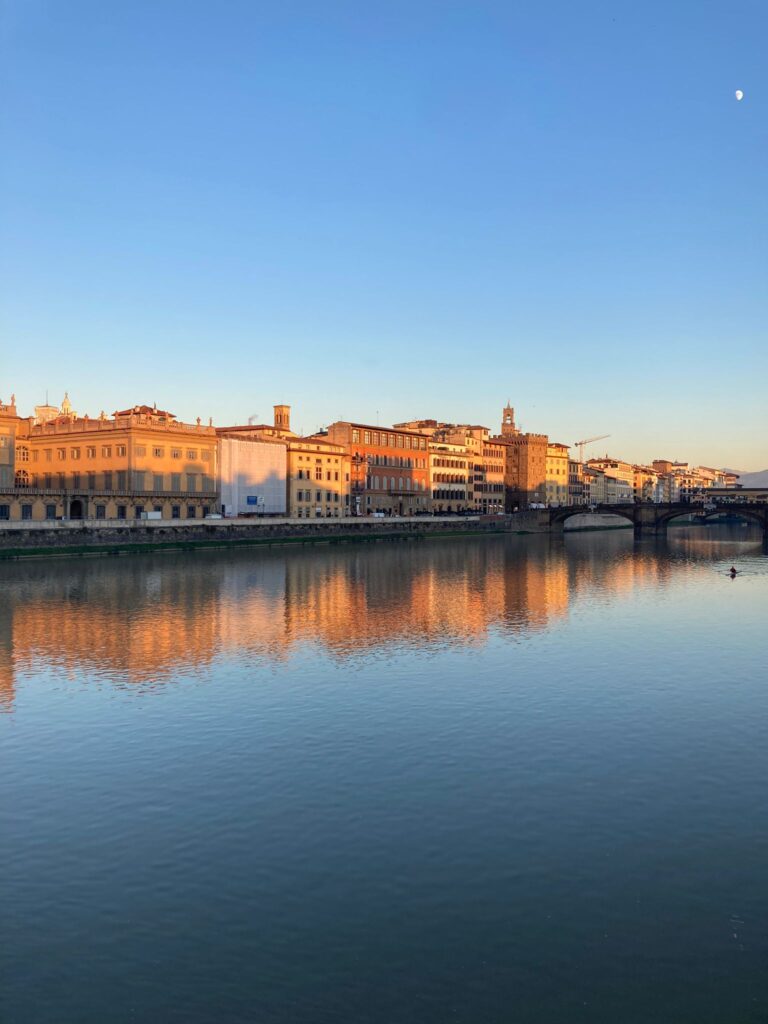 “Oltrarno”: a view of Florence from over the bridge, near the Santo Spirito neighborhood. [Credit: Lavinia Elizabeth Landi]

Night and Day in the Santo Spirito Piazza

(FLORENCE, Italy)—My grandmother, a political journalist who is preoccupied with the future of new generations, always warns me not to hang out in the Santo Spirito neighborhood at night. It could be dangerous. It’s full of young people peeing on the street and drinking on the steps of the church that sits on the Santo Spirito square in Florence, Italy.

In the morning, however, my nonna loves to walk around the neighborhood when the fruit and vegetable market is open, when bakers and flower sellers arrange their wares, and when people walk past the church that has safeguarded world-famous artworks for centuries—even as the world outside it was changing.

When night falls, market-day Santo Spirito puts on a nose ring and Doc Martens as young people gather at the steps meeting their friends, drinking, laughing, while one of the first works by Michelangelo, a wooden crucifix, hangs quietly in the dark less than 30 meters from them.

It was a gathering site for the younger generations, and it has been killed by the elders.

The church brings a new generation to the Santo Spirito area, infusing it with a counterculture of young people making the steps their stage for the night. Following a series of noise complaints, political leaders of the Florentine province have decided to draw the curtain on this stage.

Santo Spirito, just across the river Arno, “oltrarno,” as Florentine citizens say, is one of the city’s most fascinating neighborhoods. To preserve the quiet nature of the square,  the city council voted to place barricades in front of the renowned Santo Spirito Church.  They are meant to prevent people from sitting down, drinking, and eating on the church steps. The barricades are more symbolic than functional— thick blocks of cement connected by a  loose rope.

The barricades were introduced due to the often disruptive nightlife which woke residents in the middle of the night, leaving the square in a hideous condition. They were introduced in order to “protect the church” according to the city council.

“We are working to protect an important square with appropriate solutions. Our aim is to find a balance between different needs,” deputy mayor Alessia Bettini told La Repubblica.

However, according to young people, their needs are not being met. 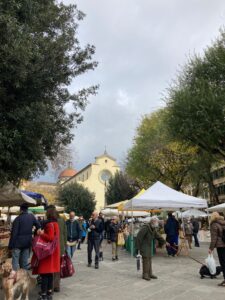 The Italian “piazza” and democracy

Asked what the steps mean to them, a few young people who regularly hang out in the neighborhood were clear.

“They mean freedom” Yuri Maffei, 30, told The Click in Italian “The freedom we had as young people to just hang out without being restricted to a four-seat table at a bar. On the steps, we could play the guitar and sing all together, we could chat about trivial matters as well as converse on important social issues. It was a gathering site for the younger generations, and it has been killed by the elders.”

Maffei, a skateboard instructor who works at a pizzeria, stopped hanging out in Santo Spirito since the new barricades were introduced.

“To me they represent an encounter between people, and therefore the new barricades better symbolize the current historical moment more than anything else,” said Ludovica Artuso, a 24-year-old college student majoring in psychology. The barricades “are a limitation to life in the neighborhood of Santo Spirito, not just to nightlife, they are symbolic barricades against life,” she said.

When the barriers first went up there were peaceful protests.  The last was a June 18 jam session held on the steps of the church with signs saying “Don’t take the street away from us,” and “The street is not owned by those who sit at tables.” Since then the barriers in front of the Santo Spirito Church have not been touched. No stickers, no tags or graffiti, no plastic glasses or bottles left on them.

Walking past them provokes a strange sense of emptiness and melancholy recalling scenes of people eating a slice of pizza, “pizza al taglio” or a “panino,” drinking a juice or a beer or a glass of wine from one of the bars of the square; people taking a break from a long walk through the market; people singing and conversing; enjoying the sun; people sharing moments on the steps of one of the most fascinating Renaissance buildings of the entire city.

Tomaso Montanari, an art historian and resident of the Santo Spirito neighborhood, sees the barricades as “horrible blocks of cement that go against the Catholic tradition of community and the Italian idea of ‘piazza’.” According to him, to place some easily removable barricades on the steps of the church to prevent people to sit down and eat or drink something when the whole square itself has become a “giant restaurant” due to new COVID-19 policies—which place numerous tables and chairs outside—is a political choice that doesn’t make much political sense: “It is a denial of the concept of square” which, according to him, is tied to concepts of freedom and community, of democracy and of the ancient Greek word “polis.”

“Now, the square can only be lived by those who pay; consumers have replaced citizens,” he said.

At night, especially during the weekend, there are often one or two police cars parked in front of the church. The police officers keep an eye on whoever approaches the steps with the intent of sitting down, in case the barriers are not enough of a deterrent. 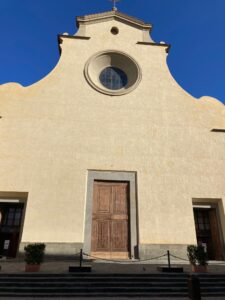 The cultural experience of the church

The changing, animated life going on outside of the church contrasts with the still, centuries-old religious subjects portrayed in the Renaissance pictures that fill its quiet interior. The silent, spiritual atmosphere imbued in its tall ceiling and decorated windows contrasts with the neighborhood’s more hostile, double life.

When entering the church, a visitor notices a series of altars with their original altarpieces, almost mirroring the booths of the morning market. Above them hang paintings of the Renaissance period, such as the “Pala Nerli” by Filippino Lippi (1485-1488) and the “Pietà” by Nanni di Baccio Bigio, a 1549 reproduction of Michelangelo’s sculpture held in the St. Peter’s Basilica in Rome.

Designed by Filippo Brunelleschi and directed by Sant’Agostino monks, the church hosts spectacular works by some of the most significant artists of the city, including the Wooden Crucified Christ sculpted by a young Michelangelo in 1493 as a tribute to the priest of the Church to thank him for his hospitality and for giving him the opportunity to study anatomy on corpses.

According to art historian Giorgio Bonsanti, the first design by Brunelleschi was more similar to the Duomo of Orvieto and later modified throughout the years.

Inside, there are not many visitors even if it’s a Saturday morning and people are usually off from work and mass isn’t until evening, or Sunday morning. Most of the people are all out, buying vegetables and cheese for lunch from the fresh market or enjoying a coffee at the bar.

The Church, a historical symbol of the Florentine “piazza,” is not a place for gathering anymore. The steps, which hosted hundreds of young people at night, have become quiet and still like the paintings hung above the altars.

Since the barriers went up, the nightlife has moved to the Sant’Ambrogio neighborhood, another jewel of the Florentine “piazzas”, with the Sant’ambrogio Church at its center.

As in Santo Spirito, policemen are starting to check on bars at their closing time, asking people to go home and leave the streets. History repeats itself in the Florentine neighborhoods, and Nonna now warns me not to hang out there.