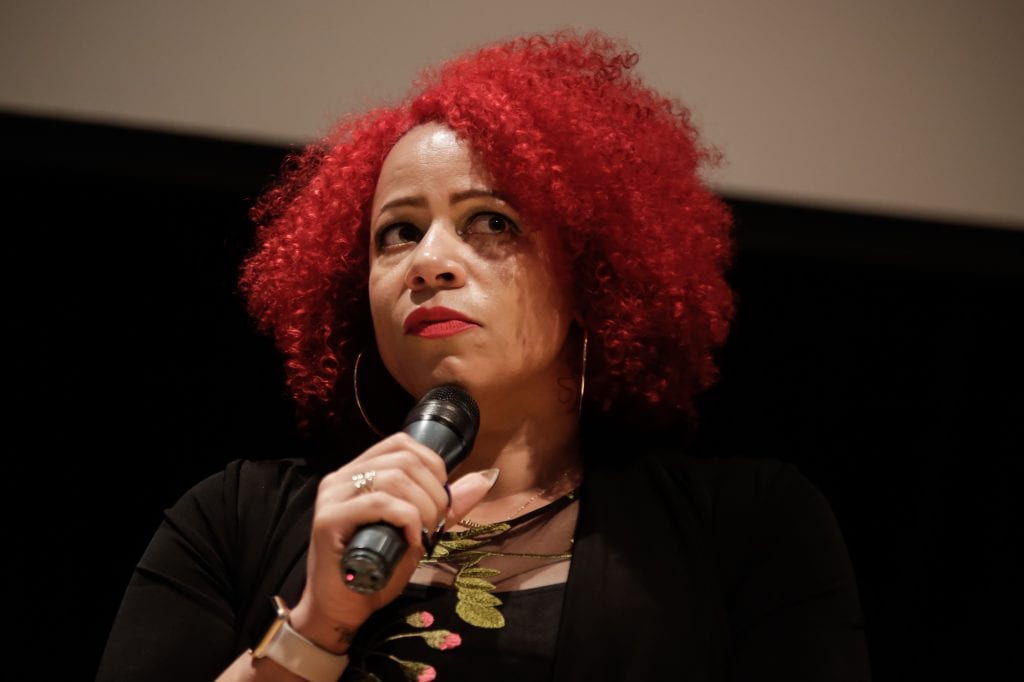 Nikole Hannah-Jones Is Confronting Truths About The Legacy of Slavery

In the banner of her website, in bold white font against a hot pink background, Nikole Hannah-Jones says, “I see my work as forcing us to confront our hypocrisy, forcing us to confront the truth that we would rather ignore.” Beside these words, Hannah-Jones is shown sitting in a big yellow armchair staring down the camera as if offering a challenge.

Hannah-Jones is an investigative reporter who has covered racial injustice, education, healthcare, and more, for the likes of ProPublica and The New York Times, where she is a staff writer for the Magazine. After receiving a 2017 MacArthur Genius Grant for her work to reshape national conversations around education reform, she led The New York Times Magazine’s 1619 Project, which aims to reframe America’s understanding of slavery as a central and fundamental factor in American systems and democracy.

Hannah-Jones’s work to dissect education issues were a natural path to diving in deep on how slavery and its byproducts have shaped America today. In a ProPublica investigation, for instance, Hannah-Jones breaks down the details of Michael Brown’s school district near Ferguson, Missouri, where he was killed by a police officer. The piece outlined the school district — one of the “poorest and most segregated in Missouri” — and drew attention to chipped veneer of news stories that reported on Brown’s recent graduation as compounding the tragedy of his death, without acknowledgement that the education system with a legacy of segregation had been a factor of systemic racism in his life.

“But if Brown’s educational experience was a success story, it was a damning one,” Hannah-Jones wrote in the piece to hit highlight that mainstream narratives often ignore the uncomfortable context that led to them.

It’s a tone that I’ve come to recognize as I’ve read The 1619 Project and listened to the accompanying podcast. Hannah-Jones’ work reattaches current events to the weight of the systems that influence them. This project makes clear that democracy and America’s most fundamental systems are rooted in the first slave sale in Virginia in 1619, and that exchange set into motion an entire nation.

Hannah-Jones asserts that Black Americans hold more esteem in the tenets of American democracy than those who it was originally written for and have been working to perfect it for all of America’s history. After all, Thomas Jefferson wrote the Declaration of Independence while he owned slaves and was served by his enslaved brother-in-law. He knew what he wrote — that “all men are created equal”— was a lie. It’s been Black Americans, the project posits, who have made the greatest moves to make hold true to those claims.

The launch of the project drew praise and censure. As the overprint and the reprint of the issue sold out, some — including conservative politicians and right-wing pundits — condemned it as unpatriotic to imply that America didn’t begin with the founding fathers. Newt Gingrich and Senator Ted Cruz called it outright propaganda and lies. On Twitter, Hannah-Jones defended the project and has continued to point to meaningful work from other journalists. When claims of plagiarism arose from a scholar whose studies intersected the Project’s content, Hannah-Jones defended her and her team’s extensive research and called for any substantiation of the claims — they were not produced — and backed journalists as subject-matter experts. When a writer penned an op-ed that the Project was more about American exceptionalism than anti-slavery, Hannah-Jones defended it publicly. Meanwhile, school systems, including Chicago Public Schools, announced that they would be including the project’s supplemental lesson plans in their curriculum.

Both during and after publication, Hannah-Jones’ voice has been the loudest for retelling of slavery in America, pushing readers to re-examine what they know on a large scale. And as host of the podcast, she was part of the story, from the tale of her father’s birth on a sharecropping farm, to her uncle’s struggle to access healthcare — and how healthcare disparities are part of the legacy of slavery.

Despite Hannah-Jones’ deep connection with the subject matter, herreporting isn’t heavy-handed evangelism — by allowing listeners a glimpse into her own family’s experience with all of the systems that are connected by the legacy of slavery, she’s given readers and listeners a point of reference to understand the complicated web that these issues exist within. And just like she did when called out how Michael Brown’s education had posed a systemic challenge in his life and yet an achievement in his death, Hannah-Jones draws a line through an issue, all the way back to its foundations.