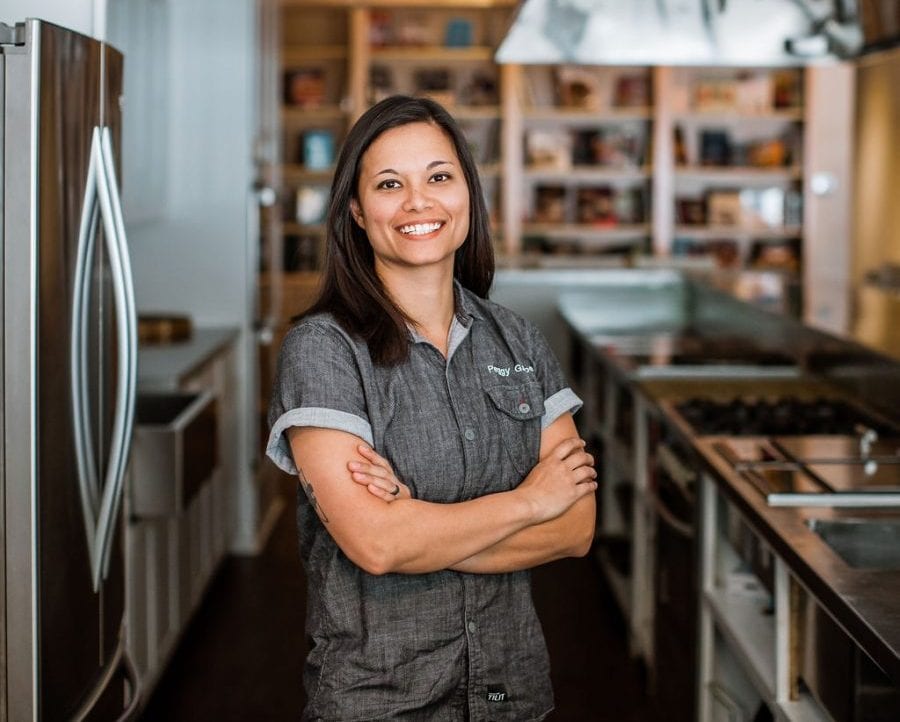 Like many Americans, Peggy Garbe dreamed of someday quitting her day job to turn her passion into a business. In spring of 2019, she was able to make the transition from marketing specialist to owner of her own successful small business.

Ready Set Prep’d is a meal prep service that provides healthy, pre-portioned meals to customers each week. The company employs bold flavors and fresh homemade ingredients to make meals that fit a number of diets and lifestyles, without falling victim to the stereotype of bland “health food.”

The company is built on Garbe’s culinary background — She received a culinary degree at Sullivan University and worked as a line cook at Louisville mainstay Jack Fry’s before joining the staff at Milkwood under well-known chef Edward Lee.

“I learned exponentially there,” Garbe explained. “And was quite happy there. But… my husband and I had a child five years ago and, when she was almost two — you kind of have to run through the decision of, ‘Do I want to put my career over my family, or does my family matter more to me?’”

While she enjoyed her culinary career, Garbe made the decision to leave so she could be there for her kid on weekends, holidays, soccer games and dance class.

“Those are things I wanted to watch my kid do. So, I left my job as a pastry chef and took a nine-to-five, corporate job,” Garbe explains. “I was good at my job, but I hated it. It wasn’t as fulfilling as anything I’ve ever done, especially in the service industry. There was always a yearning to come back – even though I told myself that I would never go back.”

From the time her daughter was two to the time she was almost five, Garbe worked, and she went to her daughter’s sporting events and classes. She joined a crossfit gym, and she took advantage of her company’s tuition reimbursement program to finish a bachelor’s degree in Business Administration with a concentration in marketing. From there, the idea for Ready Set Prep’d developed.

“One of the last classes I had to take was a venture capitalist class,” Garbe explained. “While many people basically made up a fake business, I decided to take it seriously… I wrote a business plan for Ready Set Prep’d and kind of researched what it took to take additional steps, slowly.”

She registered with the state of Indiana as a business, filed for an LLC, and looked into what taxes would be like. Then, when it looked like the dream was a feasible reality, Garbe and her husband Andrew decided to take a bigger step — they reached out to the Southern Indiana Small Business Development Center for insight into starting a business. Then, the Garbes called their realtor to find a location.

By this point, Ready Set Prep’d was in unofficial operation. Through her crossfit gym, Garbe had begun meal prepping to stay on track with periodic nutritional challenges. She’d found ways to take flavorful, restaurant-quality food and make them fit the macros and other nutritional parameters, and people started to notice — especially when she began posting photos on social media.

“I would come up with unique dishes,” Garbe explained. “And I’d post those things on Instagram, and I found that a lot of people were liking and commenting and sharing what I had. And [I would] get these random comments from people I hadn’t talked to in forever, saying stuff like, ‘You know, I’d pay you to do that for me’ or ‘You make it look so easy. If I could make healthy food that way, then I would eat it all the time.’ Last summer, I took people up on that.” 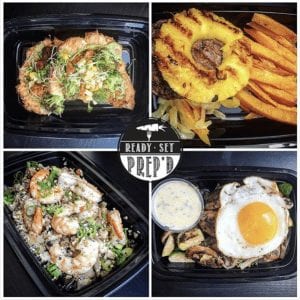 Garbe began prepping food en masse from her home kitchen for family and friends. It began with a group of five or six coworkers and gym friends, then grew to 10. “I’d end up making 50 to 70 extra meals a week for those people and they would pay me for it. And they started telling their friends,” Garbe explained.

The decision to dive back into the restaurant business was not an easy one. The industry is infamously risky, and Garbe had already left once, choosing to prioritize her family over the late nights and weekends that restaurants require. But at a point, she reached max capacity for what she could produce and store at home. If she were to continue, it was time to take another step — and, numbers-wise, it was beginning to make sense.

By then, the realtor had found two locations that suited the Garbes needs, but the startup costs added up quickly. To build out a commercial kitchen and the proper ventilation system would cost upwards of $100,000. The Garbes pitched the local Horseshow Foundation for a small business loan that would provide up to $50,000 with a low interest rate. Though the approval board was interested in the business concept, the startup costs were too high and the loan was denied. But the board took time to give feedback, including pointing out issues in their proposed lease, and places where the Garbes could cut costs.

“It was heart crushing, and it was terrible… But instead of just burying myself in my sadness, I decided no, I wanted this to happen,” Garbe explained. “Because I hated my job so much and I needed to take control of my life. So it was just, not taking no for an answer.”

Their realtor happened to own a space in downtown New Albany, Indiana, that he subleased to small businesses as part of an incubator program. Mesa, a show kitchen that hosts chefs for cooking classes and demonstrations on weekends, was free for use during weekdays.

“It’s small and set up as a show kitchen, but it would allow us to get in front of the general public,” Garbe said. “In retrospect, getting that no from the Horseshoe Foundation saved us hundreds of thousands of dollars in debt and time.”

With minimal startup costs, Ready Set Prep’d opened for business just a few weeks after finalizing terms with Mesa. In the first month, the business turned a profit. Within six months, RSP had partnered with local gyms and businesses to set up auxiliary pick-up locations for customers, and it’s incorporated add-ons to the menu, like snack packs and a rotating selection of protein donuts. 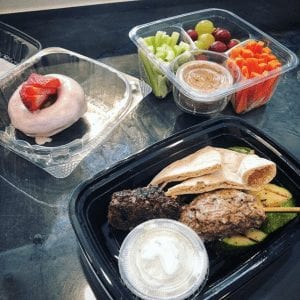 “Our profit margin after six months is 35.1%. The normal restaurants’ are 10%.” explained Garbe. “Because we have low overhead – we don’t have a building we have to pay utilities on, we basically pay rent, we pay our employees and we pay for food costs.”

And the business is a family affair. Garbe’s husband comes in to do the dishes and “earn his 25%.” Even her daughter helps clean up at the end of the day.

When Ready Set Prep’d makes its next step in growth – moving into its own dedicated brick-and-mortar, Garbe feels that they’ll have room to do that, “We feel that we could account for that by having more customers in a space of our own, because we’d be open longer periods of time.”