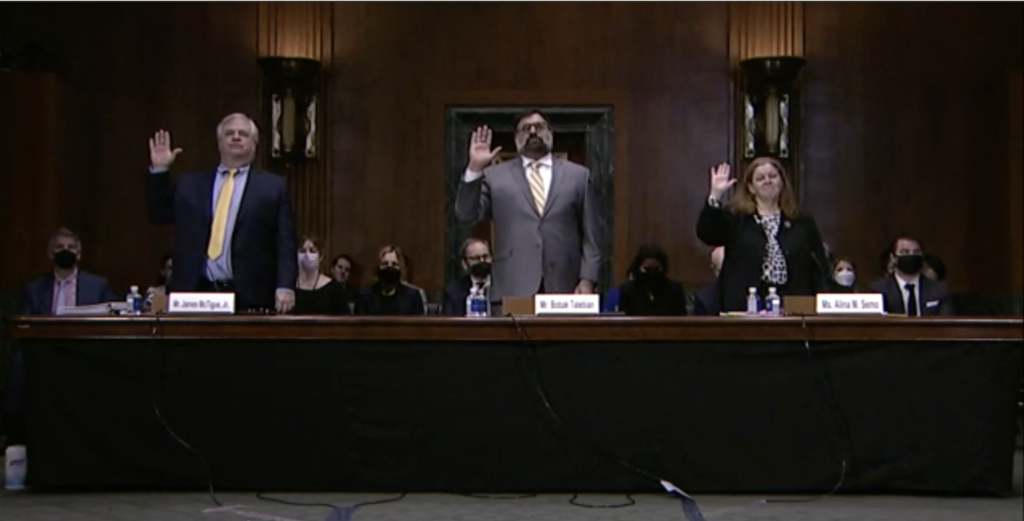 (WASHINGTON, D.C.) – “[The] American people’s right to know what their government is doing— which is what FOIA does—is the central protector against the abuses by the powerful,” said Vermont Sen. Patrick Leahy during the Senate Judiciary Committee hearing to address problems with the federal Freedom of Information Act (FOIA).

“Whether the information be released or requested, FOIA is responsible for breaking news stories,”  he said at the March 29 hearing. “FOIA helped reveal racial disparities in the hiring caused by COVID-19 as well as flaws in the government’s response to the public health crisis.”

While no piece of legislation was set in motion that day, witnesses appeared before the committee to discuss challenges facing FOIA compliance at the Dirksen Senate Office.

According to Leahy, a hearing on FOIA had not been held since 2018, leading to some inconsistencies between both Republican and Democratic administrations.

Sen. Chuck Grassley (R-Iowa), ranking member of the committee who worked with Leahy to produce the FOIA Improvement Act of 2016, expressed his disappointment.

“Unfortunately, there are still delays and backlogs of FOIA requests,” said Grassley. “The Government Accountability Office (GAO) found that requests increased 18% from 2019 to 2020.”

Grassley added that backlog requests and federal agency usage of allowable exemptions to the law have doubled since 2012, according to the GAO  the report.

“Federal agencies have doubled their use of this exemption to withhold information from the public,” said Grassley. “The Government Accountability Office found that 25 federal agencies didn’t report a single proactive disclosure. Now, how is that possible?”

McTigue highlighted how federal agencies adapted during the pandemic to provide the public with access to information.

He said that the mandate for federal employees to telework significantly affected their performance having limited to no equipment at home, limited ability to receive FOIA requests by mail, and limited access to printed documents needed to process requests.

Talebian stated that while OIP faced challenges from the lengthy government shutdown in 2019 to the pandemic in 2020, he and OIP worked to mitigate the challenges and will offer future virtual training and e-learning modules to FOIA professionals.

“In the face of these challenges, agencies have continued to faithfully administer the FOIA, processing over 2.4 million requests over the past three years,” said Talebian. “OIP also makes available key resources to help agencies and their administration of the FOIA including the Department of Justice guide to the FOIA, court decision summaries, a FOIA self-assessment tool kit, and by providing real time advice through our FOIA counselor service.”

Semo detailed that impatience and confusion is a growing concern with OGIS.

“In our dispute resolution practice, we are encountering requestors who are angry and frustrated with the FOIA process,” said Semo. “We are also hearing anecdotal stories of FOIA professionals experiencing frustration and burnout. Delays have been the top concern for both requesters and FOIA processors.”

“We saw the number of requests for OGIS assistance involving delays jump 73% in fiscal year 2021, and for 85% of those, the requestor had asked for and was unable to obtain an EDC,” said Semo. “Our review of all agency FOIA websites in 2020 showed that nearly 63% did not provide updates on how the pandemic was affecting FOIA processing.”

Leahy then opened the floor to questioning for McTigue, Talebian, and Semo and concluded the hearing with a recess at the strike of his gavel.