A poem pasted to a public utility box in the Capitol Hill neighborhood of Washington, D.C. [Credit: Will Schick]

The Poet Posting Stickers All Over Washington, D.C.

(WASHINGTON, D.C.) — There’s a small two-inch by two-inch white sticker posted to the rack of a community bike share outside a grocery store in the quiet D.C. residential neighborhood of Capitol Hill. The sticker — which is easy to miss because of its size — reads simply: “Night Poems Uploaded Freshly.” Beneath the bolded text there’s a phone number. When dialed, it connects to a recording of a man reading a poem.

These small, innocuous stickers are pasted all over the city. They are on lampposts, on utility boxes, and on the walls of Metro cars, the trains in D.C.’s underground railway system. Some of them have entire poems written on them.

The Click turned to Instagram to search the origin of the sticker project, and we were able to uncover the identity of the person behind the phone number and poems.

Originally from Mississippi, Buck Downs moved to D.C. more than 30 years ago to take a job in publishing. With a bachelor’s in liberal arts from the University of Dallas and a master’s in literature from Louisiana State University, Downs said he had initially intended on becoming an English professor. But over the years, he came to find his true passion in literary arts and in poetry.

Since settling in D.C., Downs has published multiple poetry books and has become a fixture in the city’s literary scene, while continuing to work in the world of writing and publishing. His poems have also gained recognition from high-profile organizations such as the American Academy of Poets. Through the years, Downs has been known to experiment with ways people consume poetry. For instance, in the late ’90s, Downs began mailing poems en masse via postcards as a way to counterbalance the dull effects of sorting through junk mail. Here’s what Downs’ had to share about his project. 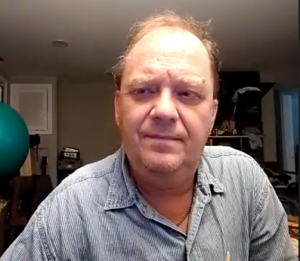 What’s the deal behind the stickers?

A few years back I had been using Facebook to take screencaps of poems of mine and poems by other people. Since Instagram is a real picture-driven medium, it seemed like the perfect place to move that thing to. So, I grabbed a bunch of poems that I had JPEGs of and uploaded them to my Instagram page. And then the stickers became a way of trying to promote the Instagram account.

Where did you get the idea to start doing recordings of poems?

I had this Google Voice number that I hadn’t really used for a number of years. It was just collecting spam voicemails from China and timeshares and stuff. So, I thought why not? This is something I know lots of other poets have done before. Poetry on the answering machine has a long-ish kind of tradition. So yeah, every night, I get a poem out of one of my books, and I just read it.

What do you hope people get out of your recordings?

Nobody’s going to pick up the phone and try to start a conversation with you, you know? Nobody’s going to return your call. You can just take 30 seconds to listen to a poem, and have something to kind of think about as you go on about your day.

How did the stickers with poems printed on them come about?

Even after 30 years of full-blown poetry practice, I’m still sometimes a little bit embarrassed to ask someone to read a whole freaking 118 pages of my stuff. To devote a week to that feels like a pretty heavy lift for the casual poetry fan, right? But here, it’s just a little thing to catch peoples’ attention. It lets them read it. It lets them think about it.