Jin Qin lectures to a full room on how to spot a rumor. [credit: Jin Qin]

‘The Truth is Everything’: A Fact-checking Army Combats Fake News in China

Jin Qin lectures on how to spot a rumor. [Credit: Jin Qin]

(CHANGZHOU, China) – Jin Qin, a worker at Zhongtian Steel in Changzhou, has been fact-checking since 2011 when an earthquake hit Japan, seriously damaging the Fukushima nuclear reactor. In China, rumors swirled that salt would protect people from radiation blown across the ocean. Jin warned acquaintances and classmates away from stockpiling salt, but upon returning home on holiday, he discovered his family hoarded salt in his absence. This incident ignited Jin’s passion for dispelling rumors.

By the beginning of 2020, Jin recruited more than 3000 volunteers to his cause when word began spreading that a mysterious new virus had emerged in Wuhan. 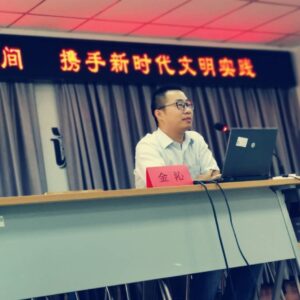 The Click: How do you and your volunteers recognize that something might be a rumor and needs to be fact-checked?

Jin Qin: On the one hand, you develop a professional sense for it. I have a feeling for it because I have seen enough [rumors]. Some things are especially tricky like you can mistake one thing for another or rehash old stuff. On the other hand, from our perspective, when something has not been confirmed, it falls in the range of that slim chance that it’s a rumor. Therefore, if we investigate 100 rumors, 50 of them may be true—the ratio is purely an example—but we take time to verify them.

The Click: How do you measure the impact you’re making?

Jin Qin: It’s more like a feeling. When I tell people about a fact, they appreciate me and what I’m doing. They really want to know what’s the fact, what’s the rumor. The more I explain, the more they come. And more and more agencies wanted to work with me, to help me find the right information.

The Click: What is an example of the most complicated rumor you’ve dealt with and how did you handle it?

Jin Qin: The most complicated rumors were during the virus period. I was working from 5 or 6 am to 1 or 2 am every day during the lockdown. The first problem was people had no experience with it. So we went looking for information all over the world. The information I had, I couldn’t get as soon as possible because it was world news as well as Chinese stuff. That meant I just couldn’t reach people with the right information fast enough. The second problem was when I would tell people it’s a rumor or something, they would think, “Why should I trust you?” Because people hadn’t experienced what was happening, so it was getting more complicated, in a harsh way.

I was fortunate that I already had a connection to the Youth League and they were able to introduce me to the hospital and the CDC. So when a rumor came in, those organizations were able to help me figure out what was and wasn’t malicious information. Help like this was key. We needed to be careful about spreading information that was useful as well as authorized. 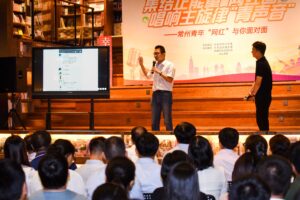 Jin Qin talks about rumors and fact-checking before an audience at Banshan Bookstore. [Credit: Jin Qin]

The Click: What do you feel is most important in fact-checking?

Jin Qin: With fact-checking, actually, there are a few issues to pay attention to.

Timeliness. One hour is prime time. As long as the right information can be released and spread within an hour, you can minimize its effect on public opinion.

Accuracy. From our perspective, 99% is never 100%. Verification must also be precise.

The Click: Is there anything you wish someone had told you when you were starting out?

Jin Qin: The truth is everything. There are some things we can only plan when the truth is at hand. Should a rumor be ignored for a bit or dispelled immediately? Do you publish articles in the public media or just spread them through social groups? What determines this is how much of the truth is known.