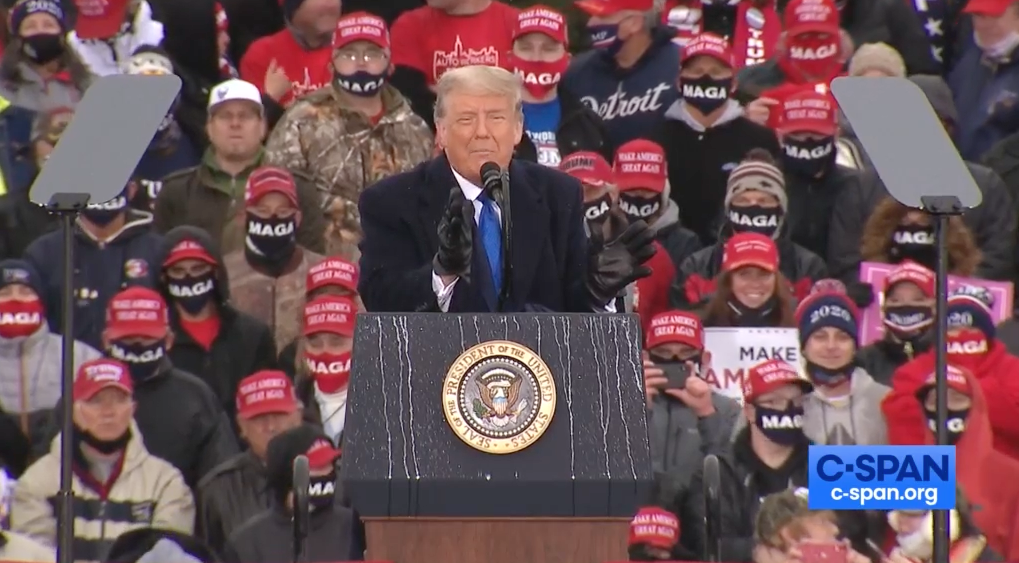 (WASHINGTON TOWNSHIP, MICH.) — “Seven months from now, the people of Michigan are going to fire the radical left Democrats,” predicted Donald Trump, as he addressed a crowd of thousands at a “Save America” rally in Washington Township, Michigan on Saturday night.

After walking out at 7:26 p.m. CST to Lee Greenwood’s “God Bless the USA,” Trump spoke for nearly two hours to close out the event, which was organized so that the former president could endorse “America First” candidates for the 2022 Michigan election. But before he called the candidates up, Trump worked the crowd.

In classic Trump fashion, he insulted Democrats, lashed out at RINOs (Republicans In Name Only), lambasted the “fake news” media, and made numerous false claims about everything from critical race theory (CRT) and “far-left gender theories” to, of course, the “stolen” 2020 presidential election.

“The presidential election was rigged and stolen and because of that, our country is being destroyed,” he said. “But while there may be nothing we can do to stop Joe Biden’s mental and physical decline, with your vote this November, we can stop our country’s decline and make America great again.”

Claims about widespread voter fraud and election tampering in the 2020 election have been summarily disproven. Yet the “Big Lie” was a major theme during the rally, with Michigan secretary of state candidate Kristina Karamo and attorney general candidate Matt DePerno echoing Trump’s claims of a stolen election. Both vowed to use their power to prevent such an outcome in the future, if elected.

Karamo, 36, claims her own vote in the 2020 election was not counted. In a tweet, she called Michigan Democrats such as Gov. Gretchen Whitmer, Attorney General Dana Nessel, and her own opponent, Secretary of State Jocelyn Benson, “part of the Soros minion club.”

References to billionaire George Soros are a common trope in Q-Anon circles, where a “Jews run the world” mentality runs rampant. This, along with other of Karamo’s antisemitic tweets, have garnered condemnation. “I’m so excited to be your next Secretary of State, to make sure that…your vote isn’t nullified by an illegal ballot,” Karamo said.

DePerno, 53, is also a propagator of the election conspiracy theory. In November 2020, the attorney filed a lawsuit alleging electoral fraud, the first of its kind in Michigan. This led The Daily Beast to call him the “original election fraud grifter.” DePerno called Trump “the greatest president in the history of this country,” and cautioned the crowd to “never submit to tyranny!”

After allowing the “America First” candidates a moment on stage, Trump resumed his monologue, waxing nostalgic about his “incredible” term as President. He also returned to making patently false claims about his achievements, and continued teasing a 2024 bid, asking “would anybody here like to see me run?”

For those who hoped the era of Trump was over, the energy of Saturday night’s rally likely felt uncomfortably familiar. And with more cash on hand than Democrats and Republicans combined, this will not be the last such event. According to the Federal Election Commission (FEC), Trump’s Save America PAC reportedly has over $110 million, more than twice as much as the Democratic National Committee (DNC), and over four times that of the Republican National Committee (RNC).