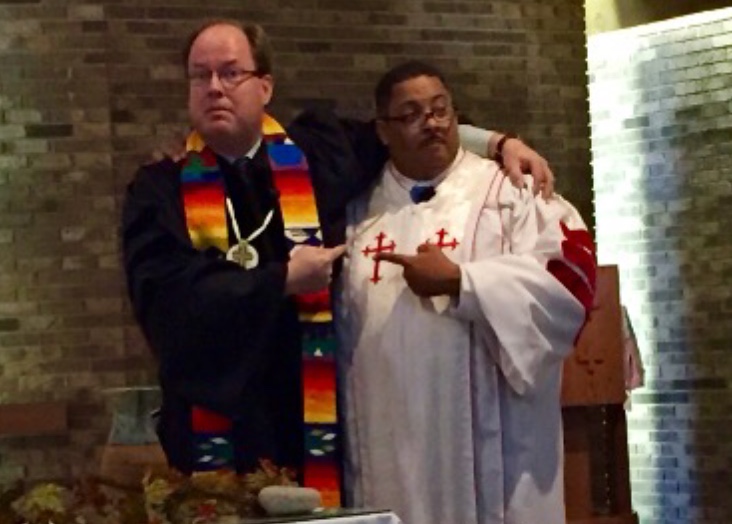 Illinois pastors (from left) Jay Moses of Hope Presbyterian Church and Dr. R. Keith Beauchamp of Bethel New Life in a moment together at the pulpit. [Photo courtesy of Pastor Jay Moses]

(WHEATON, Ill.)—From Pastor Jay Moses’ corner office at Hope Presbyterian Church, the hum of jazz music from across the room was barely audible. Floor-to-ceiling shelves filled with books stacked erratically hugged the room at the small Wheaton, Ill.-based congregation. Mid-conversation he paused and proclaimed: “He is the first African-American friend I ever had.”

Moses was speaking fondly of the 9-year friendship with Dr. R. Keith Beauchamp, the senior pastor of Bethel New Life Church, which shares the space at Hope. Beauchamp chuckled at this story. He’s heard Moses tell it before. The statement illustrated a broader gap existing between two cultures, and in turn, how the pastors set out to bridge it.

“When he said that to me, I had to look back at him and say, ‘How old are you?’” Beauchamp recounted. “And for you to say that publicly, I was like, ‘wow.’”

But, for both church leaders—one of a predominantly white church and the other an African-American church—their paths crossing nearly a decade earlier at the Chicago Theological Seminary set into motion a rich, interfaith journey that strengthened their friendship and cleared a path to unite for common causes, some more difficult than others.

When the two first met, they discovered shared commonalities from their religious upbringings—Baptist backgrounds—to their school-age children attending the same school and more recently, comic book collecting. A few years later, Beauchamp, who had been holding church services from a hotel, discussed with Moses the possibility of sharing the space with Hope and the rest, as they say, is history.

That single decision five years ago opened a door for both pastors to explore a communion between the congregations about race relations. The partnership Hope shares with Bethel New Life is part of its interfaith commitment to promoting relationships with other diverse populations and religious organizations.

“The inclusive stance of this church is unique for Wheaton,” Moses said. “Ron is a good friend and he’s the right guy. He’s able to dialogue about what is going on.”

But nothing had tested the will of the two congregations and their pastors like back-to-back acts of vandalism on the church’s property in August that occurred after the churches erected social justice signs in the wake of the Minneapolis police killing of George Floyd. While the incident was disturbing, church leaders saw another opportunity—to talk racial reconciliation.

Together, the pastors launched a new “Be the Bridge” racial reconciliation initiative based on the book of the same name by advocate Latasha Morrison. Since September, two members from each congregation have met via Zoom weekly having honest, unfiltered conversations about race.

Hope Elder Jim Vroman said he found discourse enlightening. “Many of us had no real understanding of systemic or institutional racism. It goes beyond being respectful and cordial. It goes to understanding the prejudices [Black people] encounter daily.”

Bethel New Life Associate Minister Renece Weathersby thought the vandalism made the pastors’ friendship closer, more honest, believing the congregations were brought together “to have a better understanding about humanity and the compassion you need to have for one another.”

The pastors were encouraged. In a nod to his friend, Moses said Beauchamp helped him become a better pastor. “The wisdom of the African-American church is immense because of what they have gone through,” Moses said.