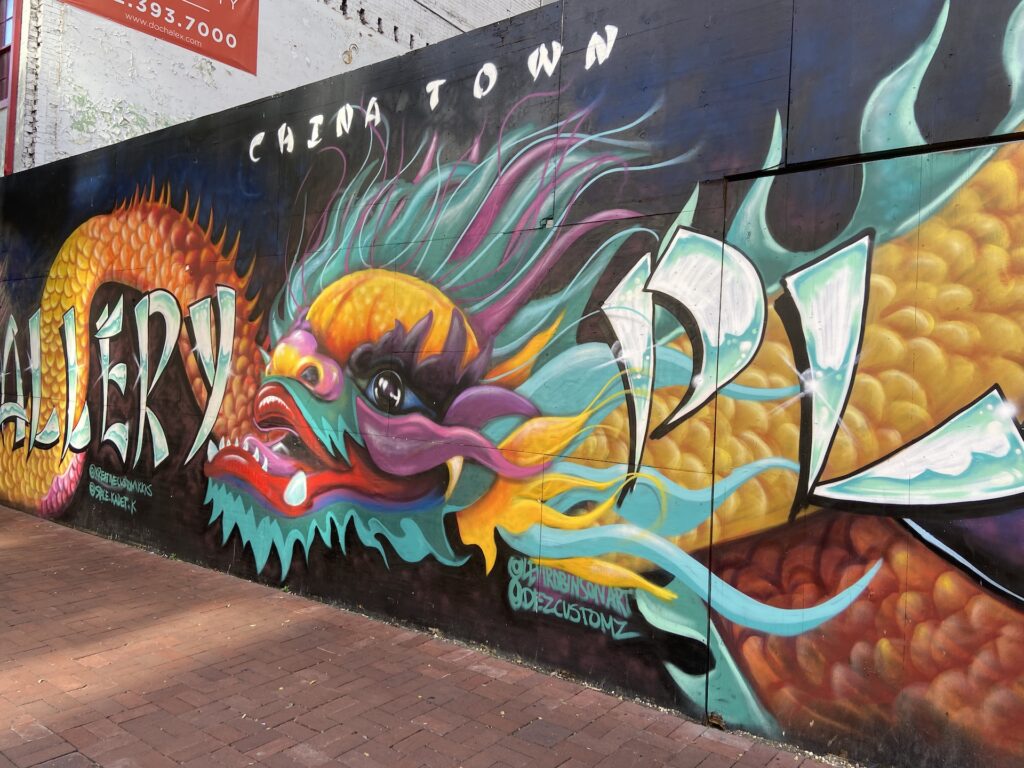 A mural painted by a local artist on a wall in D.C.’s Chinatown. [Credit: Will Schick]

D.C. Residents Worry as Its Chinatown Risks Vanishing into the Past

(WASHINGTON, D.C.) — There’s something peculiar about the nine-block section of D.C.’s historic Chinatown. Here, there’s a lack of Chinese… well, everything.

For the past several decades, an area that was once home to a bustling working-class community of Chinese Americans has transformed into a place filled with major franchise restaurants and businesses that have nothing to do with American Chinese culture. But it hasn’t always been this way.

For people like Penny Lee, a Chinese American documentary filmmaker who grew up in the D.C. area, the Chinatown from the ’70s and ’80s brimmed with culture.

Lee immigrated to the U.S. from China in 1967. This was two years after U.S. President Lyndon B. Johnson signed a law repealing a previous immigration policy that expressly discriminated against people based on their race and national origin.

When she was a girl, Lee would take a bus to Chinatown from her home on the northern end of the city to take part in kung fu and photography classes through a program sponsored by the mayor’s office.

“I would stay in Chinatown from sunrise to sunset,” she told The Click, pausing to reflect on the now distant memory. “It was wonderful.”

Memories of Chinatown’s Past

Dr. Sojin Kim, a curator at the Smithsonian Center for Folklife and Cultural Heritage, also recalls what life used to be like in the D.C. Chinatown of yesteryear.

Dr. Kim, who is Korean American, also grew up in D.C. in the ’70s and ’80s. She said that DC’s Chinatown was a special place not just for the Chinese who lived in the neighborhood, but also other Asian immigrants who relied on the area for sundries that were hard to find anywhere else.

“As an Asian American growing up in D.C., Chinatown was important in that way, because there was some public visibility and understanding that Asians were a part of the city,” she said. “But really, you understand that because it’s where your family goes to buy rice; it’s where they go to get certain ingredients.”

However, many Asian Americans don’t consider today’s Chinatown as a true cultural enclave. 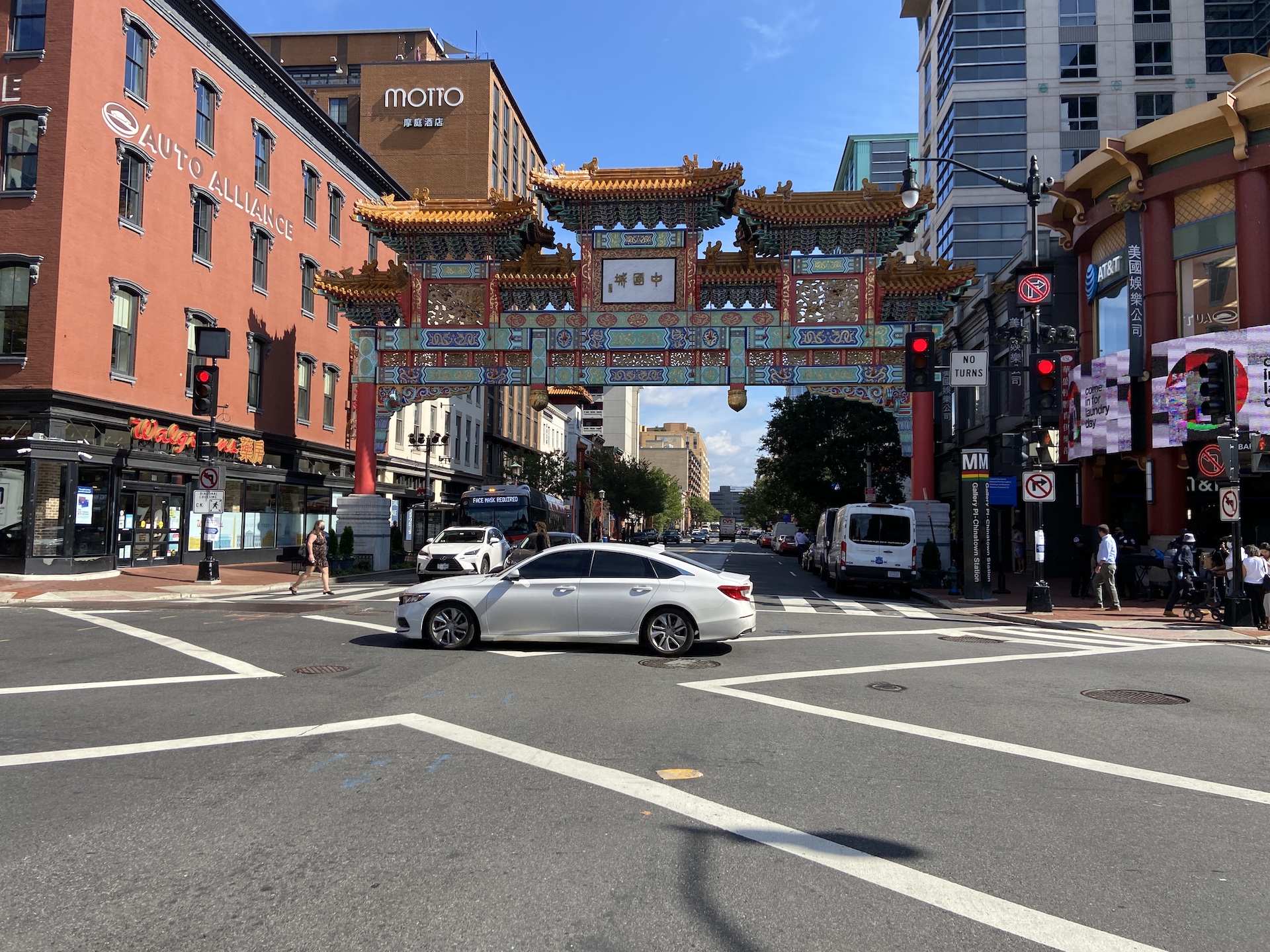 The Friendship Gate in D.C.’s Chinatown commemorates the history of the neighborhood. [Credit: Will Schick]

Mike Kwan is a Chinese American transportation planner who moved to D.C. from San Francisco seven years ago. To him, the area feels fake.

“When I want good Chinese food, or to be around more Chinese people, I don’t go to Chinatown,” he said. “I don’t know anybody that does that, to be frank.”

It’s not simply the lack of Chinese American businesses driving discussions on the neighborhood’s authenticity. There’s also the issue of some questionable Chinese translations of various business names. Some Chinese American residents have said there are signs that have upside-down and backward characters or do not translate very accurately.

“I kind of have mixed feelings about it because it’s kind of artificial,” said David Uy, the executive director of the newly opened Chinese American Museum in D.C., which is located about a mile and a half northwest of Chinatown. “But at the same time, at least there’s this effort to commemorate where the old borders of Chinatown used to be.”

For Wei Gan, the poorly translated signs are still an outward symbol that makes her feel welcome. Gan is a PhD student in anthropology at Princeton University and a recent D.C. transplant.

“Even though sometimes I find myself rolling my eyes at these translations and kitschy Chinese-identity cultural markers, the fact that I can roll my eyes to myself makes me feel like this is a place where only me or other people of Chinese descent or Asian descent can have that kind of reaction,” Gan said.

The Checkered History of D.C.’s Chinatown

From early on, immigrants from China formed Chinatowns both in D.C. and across the U.S. The neighborhoods came about not out of a desire to build and preserve cultural identities, but out of a more practical necessity.

“Chinatowns were formed basically as protective enclaves,” said Ted Gong, the founder of the 1882 Foundation, a nonprofit that promotes awareness of Chinese American history. “It was a protective space against all the expulsion, all the hangings, and all the lynchings that were happening.”

By the 1930s, the nation’s capital forced its Chinatown residents to leave the neighborhood and make way for a new set of government buildings and office spaces, according to Tom Fong, a D.C.-area resident whose grandfather, Frank Ping Fong, helped re-organize the community. Known as the unofficial mayor of Chinatown, the elder Fong headed a group of local merchants in the 1920s and kept the Chinese community together as the government used eminent domain to seize their properties. Eventually, the displaced residents re-established themselves in the current area around H Street in downtown D.C.

At the time, the move of Chinatown’s residents to H Street triggered ominous coverage in The Washington Post, which characterized the move as an “invasion” that irked existing white residents and business owners in the area.

“They bought this square, white, nondescript, three- to four-story-high building on H Street between Sixth and Seventh, and he put in the architectural permits to make the building look more Chinese,” Fong said of his grandfather.

However, the rising cost of housing and the decline in the area’s culturally specific businesses led to a precipitous drop in the number of residents with Asian heritage in the ensuing decades. The latest 2020 census data,  which uses a smaller nine-block tract to define the area, shows that only about a third of the neighborhood’s 1,009 residents identified as Asian. 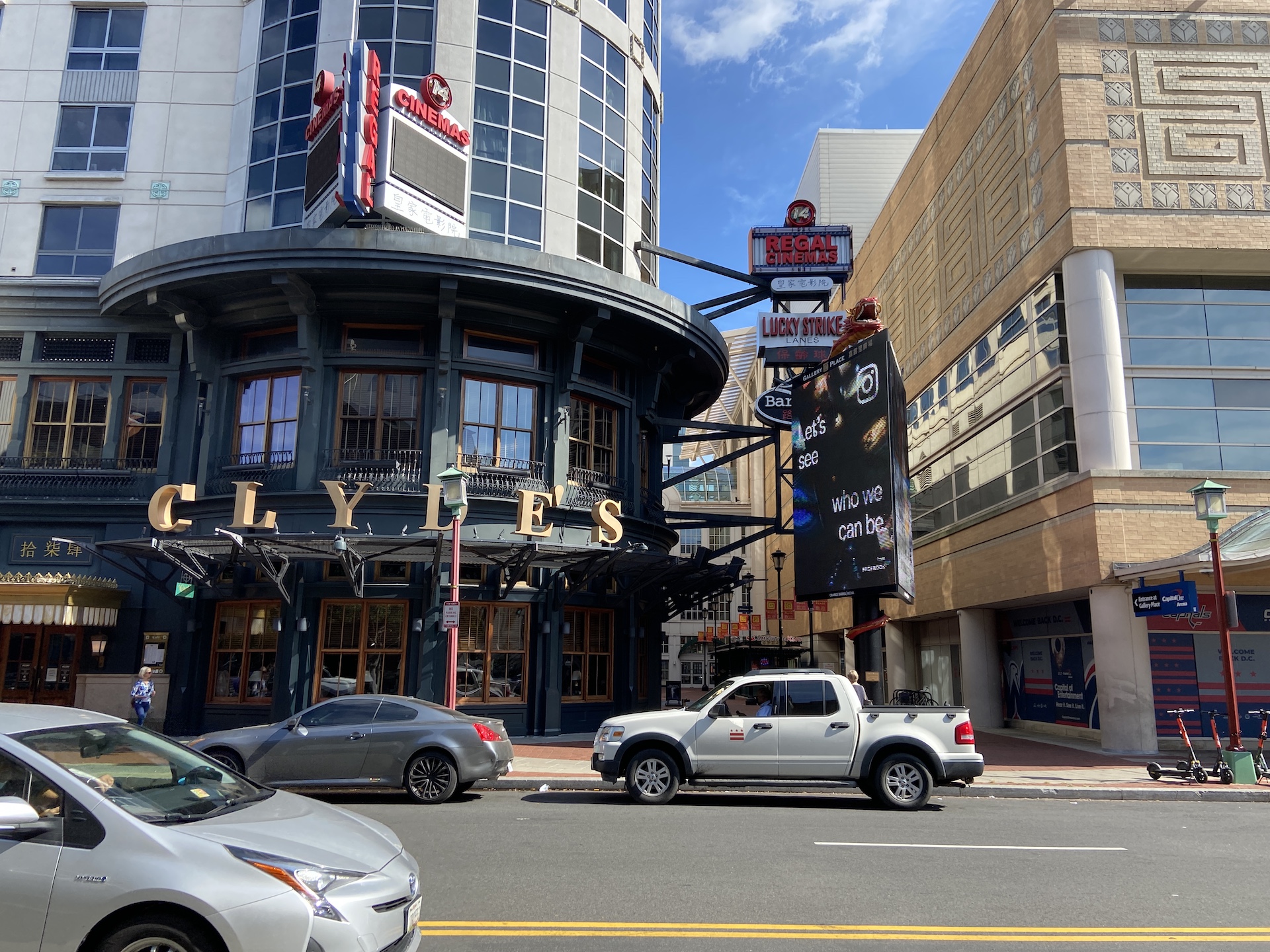 DC’s Chinatown is home to many restaurants and other businesses that have no immediate connection to Chinese culture. [Credit: Will Schick]

Today, the types of businesses and stores that Lee and Dr. Kim frequented in their youth have largely shifted out to the periphery of the city. They are mostly found in the large suburban shopping centers in neighboring Virginia and Maryland.

Finding a Way to Hold Onto Traditions

Ten years ago, the younger Fong received an unexpected request.

The president of the Chinatown Consolidated Benevolent Association of D.C., an organization that advocates for the rights of Chinese immigrants, pulled him aside at a fundraising event to ask for help with an upcoming event.

Fong had been a long-time active member and leader in the local Chinese Youth Club, a nonprofit that sponsors cultural activities and sporting events. Because of this, the association asked him to help them organize the annual Lunar New Year parade. While the holiday is extremely important to Chinese Americans, the local event had not been receiving enough support. At the time, Fong estimated that the groups that participated in the parade were 95% Chinese. He felt it was time to open it up to more communities.

“I felt like we needed to open this parade to be more like the cherry blossom parade where it was Japanese stuff, but you know what, there’s plenty of other non-Japanese things going on in the parade,” he said.

With the approval of the association’s elders, Fong slowly expanded the annual parade’s participants to include other cultural affinity groups in the city, such as a mariachi band. Local Chinese American leaders lauded the inclusion of more participants.

“‘They’re very colorful. Sound good. Get more,’” Fong recalled hearing from the association at the time.

Soon, Fong said they were able to grow the annual event from several thousand participants a year to 45,000 before the pandemic.

For Fong, bringing in other cultural groups was important because it showed that Chinatown and its traditions were a part of the overall fabric of the city, and part of a larger community of diverse Americans.

Celebrating activities such as this, he said, can also help break down barriers that divide people from one another. Given the recent rise in hate and violence against Asian Americans and Pacific Islanders in recent years, Fong said inclusive events are much more important than ever.

The annual Chinatown Lunar New Year celebration and parade, however, have been canceled for the past two years due to the pandemic. The next parade is scheduled for Sunday, Feb. 6, 2022.

But as Dr. Kim points out, preserving a culture’s heritage and traditions is not always so straightforward. “They’re not always the things you think about when you’re making a decision about renovating a building or redeveloping an area,” Kim said.

These ideas are best captured and reflected in shared community practices. These social activities might involve food, sports, or other shared customs and group behaviors.

“And I think there are a number of things in Chinatown that still do that,” she said. “I think that the parade is a really important one because that’s an example of public display.”