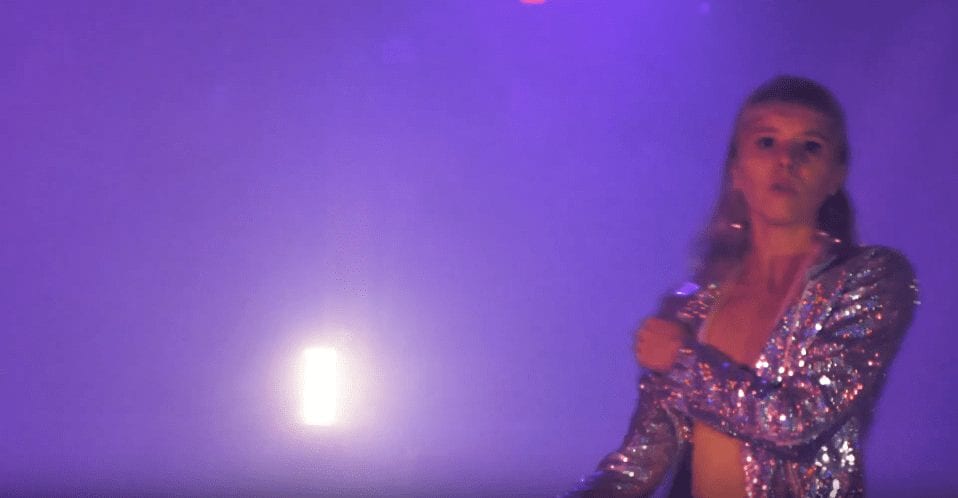 With “Back to the Wall,” Frederick The Younger Enters a New Era

A montage of Cochran dancing in an empty nightclub is featured in the music video for “Back to the Wall.” (Image: Youtube / SonablastRecords)

Jenni Cochran steps onto the dance floor in a silver, sequined blazer over a yellow top and leopard-print bike shorts. In the next scene, she flicks her wrist and sends a bouquet of flowers up in flames. In “Back to the Wall” and the accompanying music video, Cochran explores the highs and lows of a relationship through tense scenes on Wes Anderson-esque backdrops spliced together with scenes of her letting loose alone on the dance floor.

I first met Jenni Cochran in June 2014. Frederick the Younger was Saturday’s last-billed band for Louisville’s Poorcastle Music Festival. They had just two songs up on their Bandcamp, with a dozen or so in progress. Back then, Jenni and Aaron Craker — the other principal band member and Cochran’s now-fiance — were teacher’s aides, working with middle schoolers and kindergarteners, respectively.

Five years later, the band has released an album and toured extensively. They’ve changed a lot in five years — their vibe has shifted from self-described “sunshine rock” to explore heavier themes and layered sounds.

Musicians have rotated in and out around the couple. The two quit their jobs two years ago, around the time their first record came out. The band is the business now. They cashed out their retirement funds to record an album in Charleston that they scrapped when they realized it didn’t fit with their vision for the band.

Now, Cochran and Craker aren’t just engaged, they’re business partners and roommates, travel companions and musical partners. With that comes a lot of challenges. “Back to the Wall” is an artistic expression of the highs and lows of the relationship.

“You can say you love me, but you leave me with my back to the wall,” Cochran sings as the couple stands before an optical illusion. “You got me feelin’, you got me feelin’.”

In the video for “Back to the Wall,” Cochran claims her space. She dominates an entire dancefloor, sweeping through with bright, flashy colors and big movements, much like she does on stage.

“My favorite part is performing. I like taking on kinds of characters, almost,” Cochran said, explaining that she’s also spent time acting and doing improv. “It’s like my energy shifts and I feel more tough… When I’m performing, whether it be acting or on the stage, something in me, it feels so true — it feels like my truest self. Maybe I would be more like that if I let some of my barriers go in everyday life.”

The song is personal, the band’s first autobiographical “relationship” song, as opposed to love song, says Craker. “It comes from a real place,” he said. “As her co-writer, I think it’s a great song. As her partner, that [the song is] about, I wasn’t too hurt by it… By this point, we’re really close and we know the dysfunctional parts of our relationship. If anything, it’s good. It brings us closer.”

The song is a natural result of the band’s evolving vision for themselves and what they wanted for their upcoming EP, Fever.

“Sunshine rock was a pretty good description of our old music. It was very straight ahead, just feel-good. And I like that, too,” Cochran said. “But the difference now is I wanted to delve into different emotions. I’m also older now, so the nostalgia, feeling regret, heat break — things get tougher in life.”

“Baby, I’ve been drowning all night and I’ve been sleeping all day,” Cochran sings as she stares into the camera. “Slipped into the cracks in my mind, I just want you instead.”

“It’s easy to write songs and then feel like, ‘What is this doing? Is this doing anything for me emotionally, as an artist?’ Or is it just something you feel a distance from?” Cochran explained. “So I wanted to write music that felt vulnerable, close to me, cathartic… I wanted every song to have feeling. If it’s not touching something in me, I don’t want to do it.”

Fever will release on Jan. 21.  In the meantime, check out the band’s new music video for “Back to the Wall.”