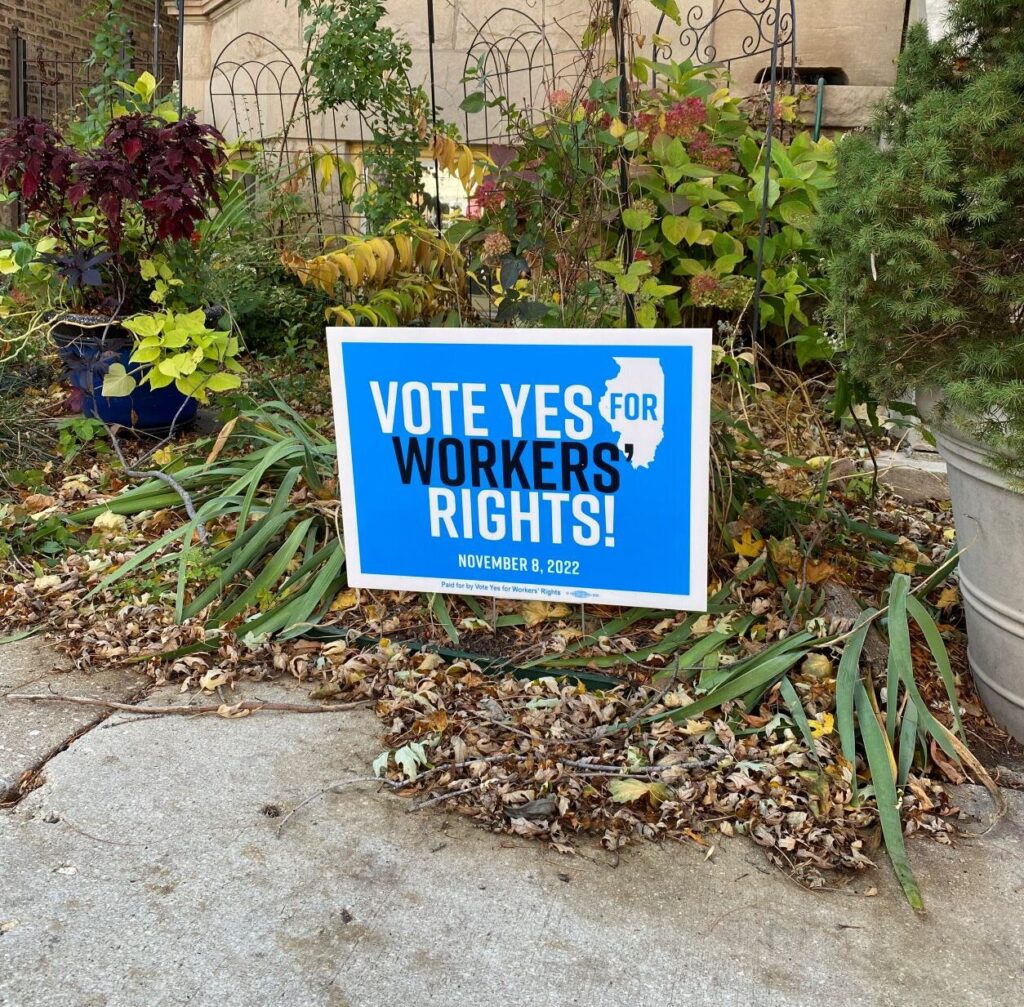 (CHICAGO)— Illinois voters approved constitutional Amendment 1, codifying the right to collective bargaining in the state constitution, with more than 50 percent of voters in favor, according to The Associated Press. Known informally as the Worker’s Rights Amendment (WRA), the measure guarantees Illinois laborers the right to organize themselves, negotiate contracts, and advocate for desired wages and benefits. It also prohibits right-to-work laws in the state constitution.

The AP announcement came one week after election day and amid confusion over whether the measure earned enough support. Amendment 1 needed 60 percent approval from residents who voted on the specific measure, or 50 percent approval out of all ballots submitted. The New York Times’ live midterm coverage reported 58.4 percent of Illinoisans voted in favor of Amendment 1, as of Nov. 17. However, The Illinois State Board of Elections will not codify the WRA until Dec. 5, when it can be sure all ballots have been counted, according to the Chicago Sun-Times. 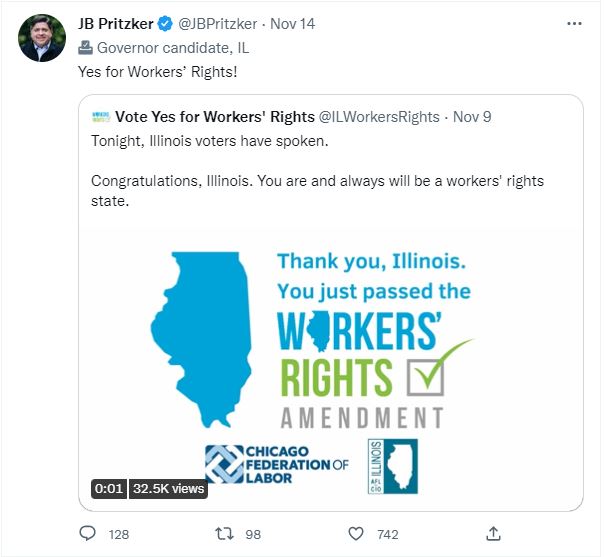 Gov. Pritzker and the Vote Yes for Workers’ Rights campaign declared victory before official results have been tallied. (Twitter)

The state’s unions already protect collective bargaining freedoms, but Amendment 1 embeds those freedoms into the Illinois Bill of Rights. Only three other states (Hawaii, New York, and Missouri) include collective bargaining rights in their constitutions. The National Labor Relations Act allows employees at private companies the freedom to unionize, negotiate salaries and working conditions, or refrain from participating in union activities. The NLRA does not apply to public sector employees, but the WRA does.

“Collective bargaining is the reason workers have rights, weekends, and a seat at the table,” Allison Ringhand, an instructional support leader at Network 6 in Chicago Public Schools, told The Click. “So many people are leaving the profession because of the demands and dehumanization they face daily and I can only imagine how much worse it would be without a union.”

Amendment 1’s ban on “right-to-work” laws makes Illinois the first and only state in the nation with such a restriction in its constitution. The ban applies to both state-wide legislation and local ordinances. Right-to-work laws allow employees to choose whether or not they join a workplace union or pay dues for union representation.

An October poll by Emerson College, WGN, and The Hill showed 54 percent of Illinois voters planned to vote yes on the WRA, 30 percent planned to vote against it, and 16 percent were undecided. As of Sept. 30, the Vote Yes For Workers Rights PAC had raised $13.6 million from a variety of donors, according to BallotPedia. By late October, the opposition raised $3 million according to the Chicago Sun-Times, $2 million of which came from Illinois resident Richard Uihlein, CEO and founder of Uline, a Wisconsin-based shipping supply company. Uihlein, a non-union company, is a top contributor to conservative political races and super PACs.

Many essential workers favor Amendment 1. The Illinois Federation of Teachers’ website says the measure “empowers educators and school staff to put students first by negotiating for smaller class sizes, improved technology for students, and additional classroom resources.” It argues that women and people of color will be better compensated under the WRA.

In August, researchers from the Illinois Economic Policy Institute and the University of Illinois at Urbana-Champaign published a report on the WRA’s potential impact on the economy. Researchers concluded the measure will, “Protect $43 billion in annual income for Illinois workers,” and prevent 70,000 laborers in the state from, “falling below the federal poverty line.”

The Illinois Policy Institute, a self-described nonpartisan nonprofit known for its conservative-leaning perspectives, said Amendment 1 “guarantees” property taxes will increase by $2,149 for the “typical Illinois family” in the next four years. This is the overarching argument against the WRA. Opponents also fear unions will have too much power and prevent businesses from coming to Illinois.

The Chicago Tribune’s editorial board recommended its readers reject Amendment 1 as it, “Likely would result in greatly increased power for unions even beyond their core (and legitimate) collective bargaining functions,” due to vague terminology and the measure’s requirement that laborers become dues-paying members of their workplace unions.  Editorial boards for Crain’s Chicago Business and The Wall Street Journal also opposed Amendment 1.

“Personally, I think it’s extremely naïve to think anyone in power, whether that be political or at work, will act in the interest of workers,” Ringhand added. “All of history has told us they don’t.”

The closest Illinois came to becoming a right-to-work state was in 2017 when the town of Lincolnshire passed a local right-to-work ordinance. Both the U.S. District Court and the U.S. Appeals Court vetoed it. In 2019, the Collective Bargaining Freedom Act, which prohibits right-to-work laws at the county, municipal, or district level, passed with flying colors in both the Illinois House and Senate.

According to Gallup, union support in the country is nearly as high as it’s ever been. Seventy-one percent of Americans approve of labor unions. Approval peaked in 1953 at 75 percent.