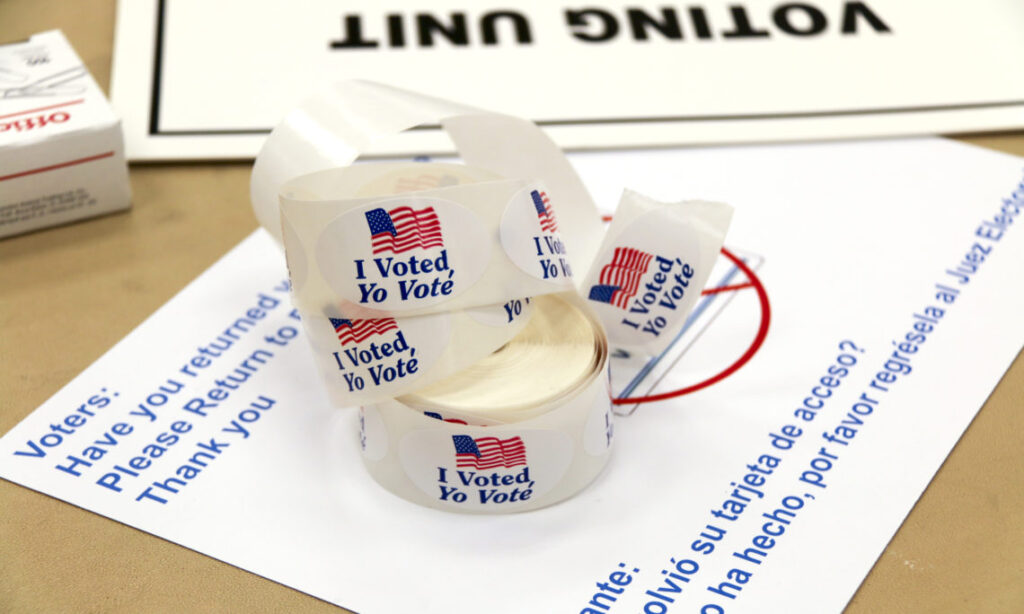 “I voted” stickers in English and Spanish, Virginia, USA, November 2014. [Credit: Organization for Security and Co-operation in Europe (OSCE)]

(PHOENIX) – A federal judge has limited the activities of ballot box watchers said to be intimidating voters in Arizona.

On Tuesday, U.S. District Judge Michael T. Liburdi granted a temporary restraining order in a lawsuit brought by an advocacy organization seeking to halt harassment and intimidation of voters dropping off ballots at collection boxes in Arizona.

The lawsuit was filed on Oct. 24 by Arizona Alliance for Retired Americans against Clean Elections USA, a QAnon conspiracy-theory-based, vigilante group, and the founder of the group, Melody Jennings. The plaintiffs are jointly represented by the pro-Democratic law firm Elias Law Group LLP and Phoenix-based law firm Herrera Arellano LLP.

A related case filed by the League of Women Voters has been combined with this one. The plaintiffs in that case are being represented by the Protect Democracy law firm.  Both are being heard by Liburdi. A former plaintiff, the Latinx voter rights group Voto Latino, was dropped from the case.

Liburdi’s temporary restraining order prohibits defendants from following, photographing, or speaking to voters within 75 feet of a ballot box, and from openly carrying firearms within 250 feet (concealed weapons are not subject to the order). The defendants are also required to debunk the conspiracy theory behind their vigilante actions prominently on their website using court-ordered text. Since the order’s duration of two weeks would go beyond Election Day on Nov. 8, the plaintiffs have achieved a substantial victory.

Clean Elections USA is a newly-formed group based on the theories promoted by the 2022 film, “2000 Mules.” The conspiracy theory uses misleading geolocation data to claim that illegal ballot harvesters known as “mules” trafficked ballots during the 2020 election. Based on this theory, Jennings has promoted, through appearances on right-wing media, her plan of guarding ballot boxes in Maricopa County, Arizona.

“You don’t want to have less than eight people,” the original complaint quotes her as saying on an appearance on “What’s on your Mind,” an AM talk radio listener call-in show, speaking of the size of vigilante groups she hopes to marshal at each location. “The goal is to be a deterrent.”

As the complaint says,  the notion of human “mules” trafficking in ballots is a debunked conspiracy theory. “Such mules do not exist, and the people Defendants are intimidating are simply voters,” the plaintiffs say.

According to the Arizona statute on ballot abuse, collecting ballots in certain cases—such as those belonging to the members of one’s household—is legal. The validity of geolocation-based evidence for ballot activity has also been questioned. Such data, according to both FactCheck.org and Philip Bump of Washington Post, is simply too imprecise to draw definite conclusions of ballot activity from.

The 2000 Mules conspiracy theory was first promoted by another group, True The Vote, led by Catherine Engelbrecht and Gregg Phillips. That group is being sued for libel, defamation, and slander by an election logistic software company. The two leaders have now been taken into custody after being found in contempt of court in that lawsuit.

Nevertheless, Clean Elections USA vigilantes have had some success in turning away voters through intimidation. Prior  attempts to deter voting have led to Congressional action, such as the Voting Rights Act of 1965 and the Ku Klux Klan Act of 1871, both of which Jennings’s group is violating, the plaintiffs claim.

This morning, the court ordered text appeared on Jennings’s Truth Social account in response to the ruling.

“In AZ-it is not always illegal to deposit multiple ballots in a ballot box. It is legal to deposit the ballot of a family member, household member, or person for whom you are the caregiver,” her pinned post says. It goes on to quote the Arizona statute on ballot abuse in its entirety, as required.

“The court’s order today recognizes the importance of the federal laws that ensure voters’ ability to participate in democracy without fear, and strikes an appropriate balance between protecting voters from intimidation and not infringing First Amendment rights,” said Orion Danjuma, counsel at Protect Democracy, on their website.  The founder of the group, Ian Bassin, announced the ruling on Twitter, calling it a “huge victory.”